Ever heard of the 'Wacky Rally'?


It sounds a bit like the 1960's cartoon 'Wacky Races' - but it's real, and it's running in Europe this weekend. The event's Web site informs us:

WHAT IS WACKY RALLY?

Essentially a banger rally is a collection of vehicles that have been purchased or otherwise obtained through various ingenious methods, and then personalised in a variety of glorious and imaginative ways. Ideas range from the Bat Mobile, animals of various denominations, pirate ships to hippy cars, tanks, and crazy paint jobs.

However, that is the nuts and bolts; doing up the car is incredibly fun but driving it across Europe is where the real fun begins. The shared challenge, the camaraderie and the memorable stories are what make the wacky rally a trip you'll remember for the rest of your life.

Rarely will you experience the freedom and "Devil may care" attitude that comes part and parcel of the rally, couple this with some of Europe's most stunning scenery and you have something special.

Don’t be fooled, this is no holiday. The rally is extremely fun but it's also a great challenge. Obstacles are part and parcel of the rally and the bond you will have with your fellow driver/s can only be described as a two year relationship rolled into four days.

One thing you must understand about this rally is that it's not a race in anyway, shape or form. This is not a poor mans gumball or a thinly disguised dart along the autobahns in a cheap motor. This, ladies and gentleman, is a fun, all inclusive jolly for people who enjoy a challenge and maybe a drink or two along the way. And even if you don’t drink there are always like minded people along for the ride.

The Wacky Rally is for anyone and everyone, from company directors, city workers, policemen and women, housewives, couples and builders to shelf stackers, unemployed, blue chip management, firemen, armed forces, nurses.... the list is endless. The important thing to know is it doesn’t matter what you do as long as you are here to respect yourself and others on the rally.

There's more information at the link.

The idea is to buy a car for less than £250 (currently about US $382) and enter it in the rally. Major repairs aren't permitted; the vehicle's total costs (purchase plus fixing-up) should be not much more than the permitted limit, although exceptions are considered on an individual basis. Artistic 'improvements' are encouraged. The Daily Mail reports that one team has really used their imagination.

It's a feat of engineering even Thunderbirds genius Brains would be proud of. 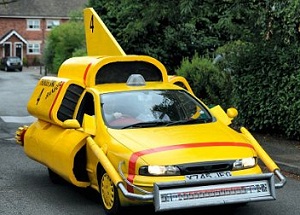 A group of friend have built a replica of Thunderbird 4 from the iconic Sixties puppet show - and they're planning to drive it to Spain.

The amateur mechanics adapted a £300 Fiat Marea into a road-going version of International Rescue's yellow submarine.

Mr Huntington, 44, from Stockport, said: 'We had heard of this race which went to Barcelona and featured all sorts of modified cars.

'We were talking about it and were a little bit worse for drink when we decided it would be good to build one of the Thunderbirds machines.

'We are all children of the sixties, so we remember the show well. It took us quite a few weekends but it was worth it to see the look on people's faces when we have taken it on test runs.

'It was incredible how many people beeped their horns or stopped on the street to watch us go past. There hasn't been a grumpy face yet.'

The three men spent 12 weeks modifying the beat-up family car with fake fins and turbines made out of polystyrene.

The trio, who work for construction firms in Greater Manchester, also scavenged leftover materials and unwanted parts - including pipes, tubing and plastic panels - from building sites.

The rally began at Lille, in northern France, yesterday morning. You can see the Thunderbird 4 replica in the back row of cars in this photograph of the pre-start line-up. 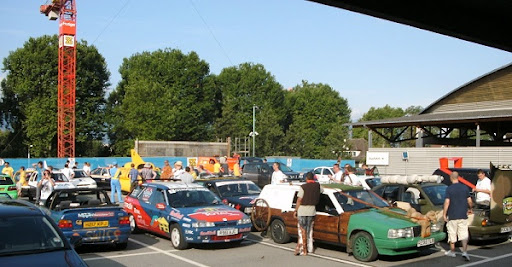 It ends in Barcelona, Spain, on Monday. There are over 50 teams, many boasting interesting titles such as the "Sandy Gerbils", the "Scooby Don'ts" and "Smell My Cheese". Those interested may follow events on the rally's blog. There's bound to be video posted to YouTube about this year's event; meanwhile, if you want, you'll find video clips of past Wacky Rallies there. Looks like a lot of fun is had by all!