On July 16th, 1945, sixty-five years ago, the first nuclear explosion in history took place at a test site on the Alamogordo Bombing Range (now the White Sands Missile Range) in New Mexico. The experimental blast was code-named 'Trinity'. 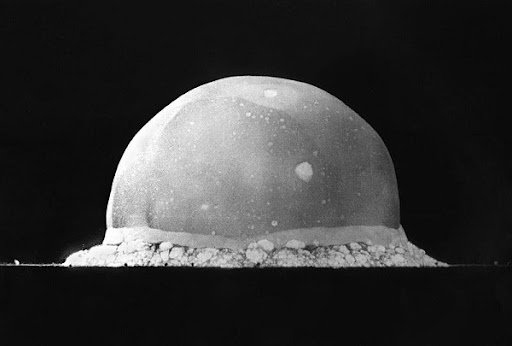 The Trinity explosion, 0.016 seconds after detonation. The fireball is already about 200 yards across. The small dots in the foreground, at the foot of the explosion, are trees.

The implosion-type bomb wasn't dropped from a plane for the test, but hoisted up a 100-foot steel tower and secured in a small cabin at the top, where the explosives were armed. 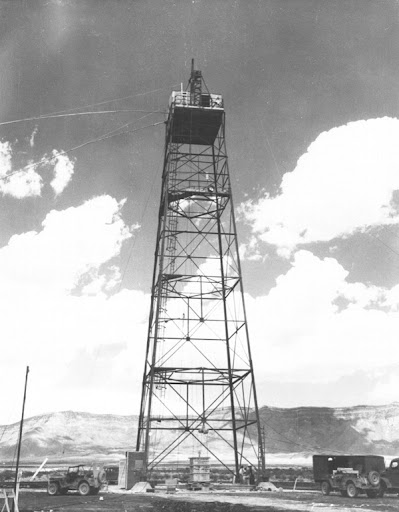 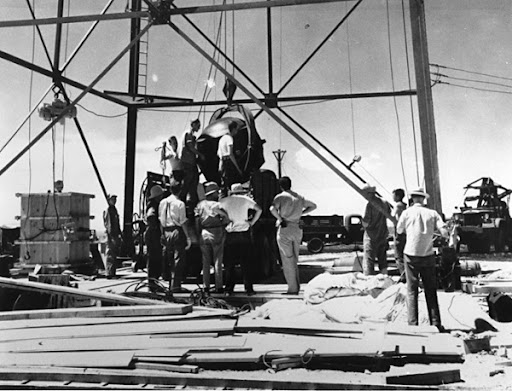 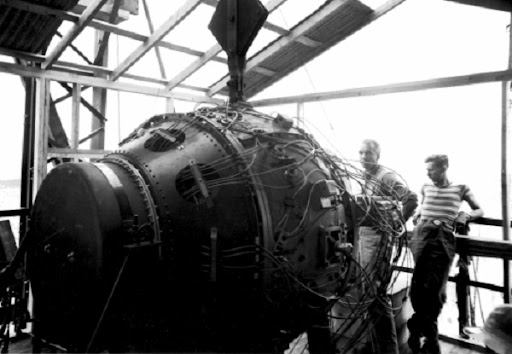 After the blast, all that remained of the tower were short stubs of its legs, showing above the sand. The rest was obliterated as if it had never existed. 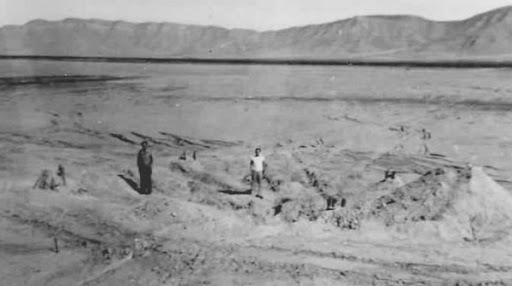 The sand itself was fused by the heat of the blast into a previously unknown amalgam of materials, subsequently christened 'Trinitite'. 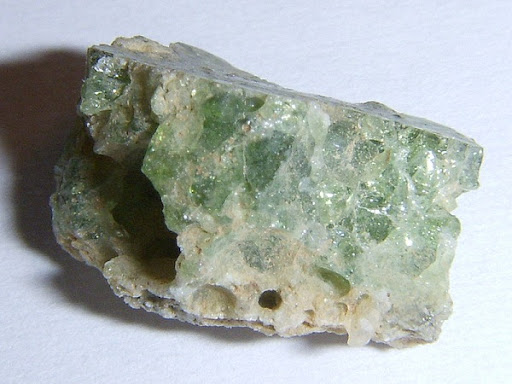 Here's the view from three different cameras of that first-ever nuclear explosion.

Today, the site of the test is marked by a stone obelisk. Twice a year, the White Sands Missile Range is opened for one day so that visitors may view the site. It's still mildly radioactive. 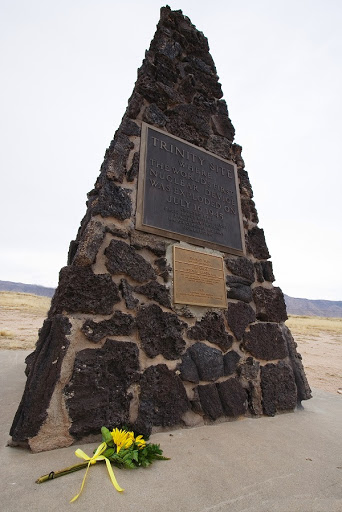 One of the finest (and funniest) memoirs of working at the Los Alamos nuclear laboratories, and of this first nuclear test, was written by physicist Richard Feynman. It's available online, if you're interested (link is to an Adobe Acrobat file in .PDF format). Very highly recommended reading - and good for several laughs, too!

For all its perils and problems, at least we can say this about the nuclear age: since 1945, no nation has had to use a nuclear weapon in anger. For that, thanks be to God.

It is a hell of a tour if you get the chance.

I have a piece of Trinitite at home. I got from my Grandfather who took part in the Manhattan Project.

Trintite looks a bit like Libyan desert glass, thought to be from a meteorite impact ages ago.

And aren't we glad it was decided late in the game not to do the test in Los Alamos itself? The giant concrete bowl they built to salvage the plutonium if the test failed is still here.

"Now I am become Death,the destroyer of world."

Feynman's story was GREAT. Thanks for letting us in on this bit of our history.

Release the cleansing breath of the Golden Flowers of the Sun. Just, y'know, a little bit in a long while.
Yes, I know the Sun works differently, but it was a good start.

Thanks for the link to Feynman's story. It reminded me of the physics guys I hung out with in college. My prof was a practical physicist, but told us stories of the theoretical guys.

He told me about a buddy of his (theoretical physicist) who was working on a problem. During a bathroom break he forgot to unzip. He said their level of concentration was just amazing.

This guy reminded me of Doug and all the fun I had working with these type guys.

I wished I'd read this a couple days ago. I spent the night in Las Cruces, NM on 15 July. Might have been able to visit White Sands...