The British firm of Bompas & Parr describe themselves as 'jellymongers'. The illustration of jellies in various sizes, shapes and (doubtless) flavors which introduces their Web site certainly gives credence to the term! 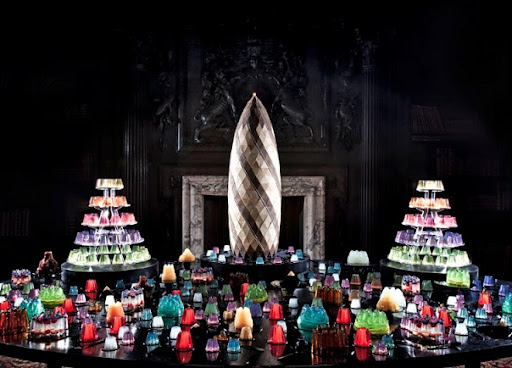 B & P have introduced a range of what they call 'Occult Jams'. This frankly puzzles me, as the definition of 'occult' is:

1. of or pertaining to magic, astrology, or any system claiming use or knowledge of secret or supernatural powers or agencies.
2. beyond the range of ordinary knowledge or understanding; mysterious.
3. secret; disclosed or communicated only to the initiated.
4. hidden from view.
5. (in early science)
a. not apparent on mere inspection but discoverable by experimentation.
b. of a nature not understood, as physical qualities.
c. dealing with such qualities; experimental: occult science.

I don't see how jams or jellies can equate to that definition! Be that as it may, B & P describe their Occult range as follows:

Since the dawn of time man has struggled to unlock the secrets of eternal life. Occult Jam is a small triumph over mortality. Base ingredients are preserved through their transformation into jam and enhanced with powerful artifacts. Occult Jam launches at The Surreal House exhibition at Barbican Art Gallery on 24th June. The jams include:

Milk jam? I know one uses milk to make cheese, but jam??? And what's the late Princess Diana's hair got to do with making it occult? Sand? Wood? Make the jam a bit grainy and/or gritty, wouldn't it? 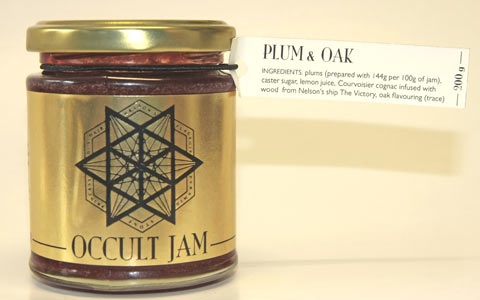 Clearly, I'm not sufficiently occult-minded to want to buy their jams. For those who are, you'll find them at the Barbican Art Gallery Shop for £5 (US $7.50) per jar. No, I don't get a commission - I'm just performing a public service by letting you know.

I was curious as to the authenticity of the ingredients claimed for each jam. After a bit of searching, I found an article in the Portsmouth News about the jam using wood from HMS Victory. It looks like it's the real deal. The article notes:

Several tons of wood from HMS Victory was kept in storage for decades at the dockyard in Portsmouth, left over from restoration works from 1922 to 1950.

In 1995, during the 500th anniversary of the founding of the dockyard in Portsmouth by Henry VII, about 150 tons of Victory oak was first put up for sale in auction. Artist David Burton and his backers for the Famous Tree Company later bought 34 tons of oak and 10 tons of copper from HMS Victory.

The then Second Sea Lord, Vice Admiral Sir Peter Spencer, and the then Captain of HMS Victory, Lieutenant Commander Frank Nowosielski, authorised the material as the genuine article and every piece carries a deed of provenance. Artist Lucy Askew then bought some of the Victory oak to make ... mini Nelson coffins which were in turn used for the jam making process.

If the wood's real, I daresay the other ingredients are too . . . but I can't help but wonder if the great Admiral would approve!