How many policemen does it take to get a security man out of a van?

That was the question people who were in Twydall Green were asking each other when a cash delivery driver got himself stuck inside his van.

Shoppers couldn't believe what they were seeing when the drama unfolded - police who came to help managed to get themselves stuck in the van as they were trying to free him.

The incident was caught on camera by Craig Scott, 21, who was working in the area at the time. Craig said it was one of the funniest things he'd seen.

It was at that point that people realised the security driver was indeed trapped inside as security measures on the vans had locked doors and windows and an escape hatch on the roof. The alarm being activated alerted police to the problem and when they arrived at the scene two officers tried to get the guard out. 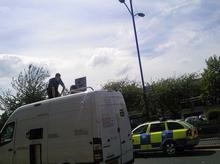 Craig added: "One managed to find a way into the escape hatch and got inside to see if the guard was OK, but then shut the hatch and got stuck himself.

"His colleague then somehow managed to get to the front of the van to try and free the pair, but she got stuck in the driver's seat as the doors would not open.

"Then lots of coppers turned up and started laughing, but after about 15 minutes one of them had managed to get through to the security company and I believe some sort of pass code was activated to disable the alarm and all were then able to get out. The guard was fine and the police left laughing their heads off."

Yes, I imagine the two cops who locked themselves inside will have to put up with a fair amount of joshing from their colleagues for the next couple of weeks!

"Yes, I imagine the two cops who locked themselves inside will have to put up with a fair amount of joshing from their colleagues for the next couple of weeks!"

Somewhere in all that there is a metaphor for the formerly Great Britain.