Warm fuzzy news of the day


I can't help it. I'm a sucker for those news reports of how a dainty elderly couple on a limited income suddenly come into wealth unexpectedly. It always makes me happy for them.

It happened yesterday to a retired couple in England. The BBC reports:

The 10-inch high, Qianlong dynasty porcelain pieces were given to the anonymous couple from Southampton as a wedding present in 1965.

They were sold to a foreign bidder on the telephone and were originally valued at between £40,000 and £60,000.

The couple said: "We are absolutely delighted and are going on holiday. This has transformed our retirement."

They're certainly beautiful pieces. According to the auctioneer's catalog (item no. 377 for their sale of July 29th, 2010):

This exceptional pair of vases may belong to a group of ritual wares that were specially commissioned by the Qing Court for placement on Buddhist altars for ceremonial use in palaces and temples either within the Forbidden Palace or Bishushanzhuang in Chengde. 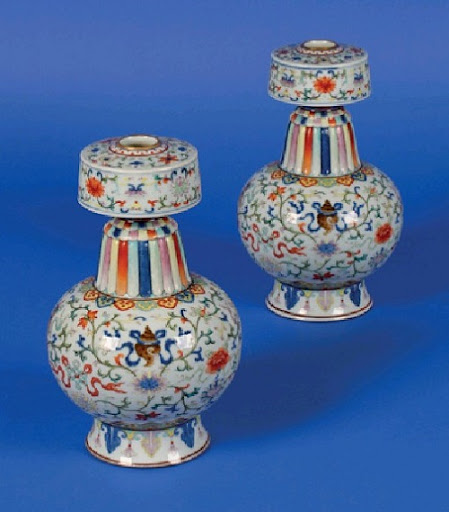 The inspiration for the form comes from Tibetan metalswares that were made as containers for storage of sacred water and used during Buddhist ceremonies. This rare form of altar vase known as a Benbaping was made to contain sacred plants.

How nice to have one's pension suddenly boosted by over three-quarters of a million dollars!