It's off to the snail races!


Here's a video clip of the breathtaking excitement! 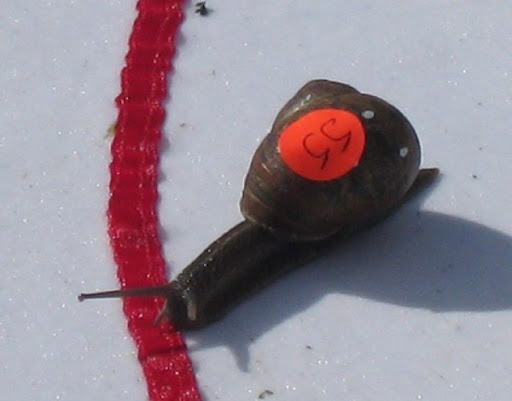 Sidney streaks for the line

The gastropod won the final at the village fete in Congham, Norfolk on Saturday in a time of three minutes and 41 seconds.

His owner, 62-year-old Claire Lawrence from Litcham, Norfolk, was presented with a silver tankard filled with lettuce.

Congham, which has hosted the world championships for more than 25 years, has been hailed as the “Newmarket of snail racing”.

Organisers believe the Norfolk village is ideal racing and breeding ground for the gastropods.

Hilary Scase, a championship official, said: "Snails like damp conditions and as Congham is surrounded by ponds and is very low lying it is just right for snails. Congham is to snail racing what Newmarket is to horse racing.” 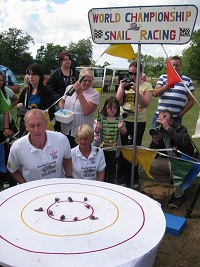 Races, which begin with the shout “Ready, steady, slow”, are held on top of a table covered with a damp cloth.

The snails are placed in the centre of an inner circle, from which they must travel 13 inches to an outer circle which forms the finishing line.

Once the snails have been placed inside the inner circle, their owners are not allowed to touch them. The 13 inch course is kept well watered throughout to encourage good speeds.

Heats are held throughout the afternoon with a grand final at the end.

The world record of 2 minutes over the 13 inch course was set up by a snail called Archie in 1995.

The previous world champion was Heikki Kovalainen, named after the Formula One driver by his owner, 13-year-old Georgie Brown from East Winch, Norfolk.


The popularity of snail racing is attested to by Guinness, who went so far as to use the 'sport' as a theme for one of their extended television advertisements.

I wonder if they cook the losers? That would spur me to greater efforts, if I were a snail . . .

I hope the losers took it in good stride, because we don't want it turn into a slugfest!