A lorry driver ended up with a face as red as the cab of his truck after a satnav blunder left him stuck in a narrow alley in the village of Bruton, Somerset.

The driver, who remains anonymous, was delivering soft drinks in the sleepy village and was searching for a parking space when his lorry became stuck between a house and an estate agents. 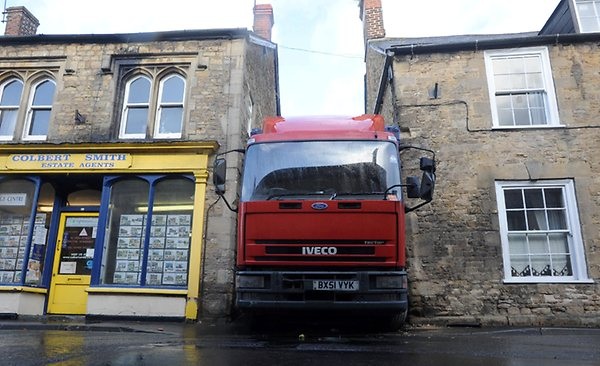 Thanks to the lane's steep incline, he was unable to reverse back up the street and had no choice but to stay put and endure the taunts of the locals, who found the whole incident much more amusing than his boss.

Mike Clifford, landlord at the nearby Sun Inn, told The Daily Mail: 'Very little happens in Bruton, so this event was the talk of the town and the driver got ripped to pieces by the locals when he came into the pub.

'When he asked where the toilets were a lot of people started giving him directions and telling him to shout if he got stuck in there.'

Why drivers like that blindly follow GPS directions without looking out of their own bloody windows first, I just do not understand . . .

what is wrong with this picture?
The mirrors, unless he backed into this spot, the mirrors would have been demolished. A gps can hardly be the blame for this man's innate stupidity. How about a tape measure next time.

Sigh... Overconfidence, and I'll bet he was used to a 'smaller' truck...