The collapse of the Chinese economy?


I've had a few people questioning whether I wasn't too negative about China's economy in my last article on the subject. Actually, I think I was very mild! There's a lot more that can be said about it, and savvier commentators than I have been saying it for many months.

Let's begin by acknowledging that China played her cards masterfully in the world's geopolitical and economic arenas over the past few decades. As Clif Carothers summed it up for Zero Hedge recently, China 'ate America's lunch'.

In thirty short years, China was able to accelerate her GDP from $216 billion to $11 trillion. She amassed reserve capital of $3 trillion. She reversed America’s fortunes from the greatest creditor nation to the greatest debtor nation. She gutted America’s factories while creating the world’s largest manufacturing base in her own country. A measure of output that highly correlates to GDP is energy consumption. In June of this year, 2011, China surpassed the United States as the largest consumer of energy on the planet. While the U.S consumes 19 percent of the world’s energy, China consumes 20.3 percent.

There's more at the link, including an analysis of how China was able to accomplish all this. However, in the process of doing so, she also exposed herself to grave economic risks, which were initially tightly managed, but which have been increasingly getting out of control. They're now at the point where they threaten all that's been accomplished so far.

I'd like to refer you to an article by Jeff Harding, writing at The Daily Capitalist, titled 'China's Fragile Economy, Its Housing Bubble, And What It Means To Us' (link is to an Adobe Acrobat document in .PDF format). It was published in March 2010, so it's a year and a half 'out of date', but it's prescient in its forecasts of what was likely to happen. Many of them have already come to pass, and others are looking like doing so. As a primer on what brought China to its present situation, it's superb. A few key points, heavily condensed from the nine-page original article:

... there are four things about China to consider.

The backbone of China's economy is exports. ... [if] the U.S. and European economies don't recover in 2010, then the Chinese are in trouble.

There's more at the link. Take a moment (several moments, actually) to read Mr. Harding's article, then come back here for the next instalment.

Back already? OK, here we go.

Tyler Durden asks, 'China: Continued Boom Or Bursting Bubble?' He concludes it's probably the latter, and points out:

China has methodically and relentlessly grown their economy for the last thirty years. However, as the US and Europe discovered the hard way with their real estate busts, if one makes an abundance of cheap-money loans to speculators, prices will rise far above the true value of the asset bought with the debt. And in time, the bubble must burst. The pressure in this bubble is mounting.

All of the major ratings agencies are warning about an impending banking crisis in China. Fitch downgraded the country’s credit rating and warned there was a 60% chance the Chinese banking system will require a bailout in the next two years. Just like the US, China has too-big-to-fail banks, with five banks accounting for 50% of the lending in China. In a July 2011 report, Moody’s cautioned that the non-performing loans on the balance sheets of Chinese banks could rise to between 8% and 12%, versus the 1% proclaimed by Chinese officials. China’s regulators have belatedly applied the brakes, but it is too late. The house of cards looks susceptible to just the slightest of breezes. 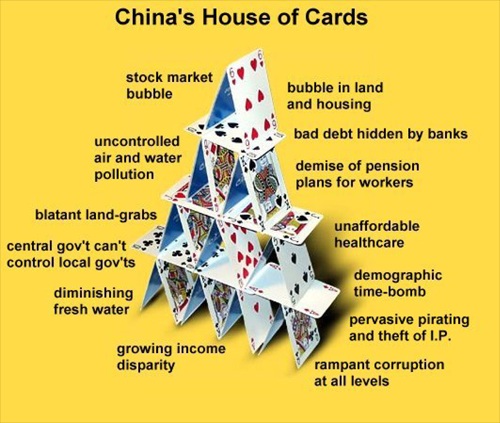 There is one sure thing regarding bubbles: They always pop. It’s in their nature.

Again, more at the link. It's very worthwhile reading.

Bearing this out, Epoch Times reported a few days ago that a Chinese professor of finance, in a speech that he believed wasn't being recorded, was unusually frank in setting out the dismal state of China's economy - indeed, he said the regime was 'nearly bankrupt'.

Lang’s assessment that the regime is bankrupt was based on five conjectures.

Firstly, that the regime’s debt sits at about 36 trillion yuan (US$5.68 trillion). This calculation is arrived at by adding up Chinese local government debt (between 16 trillion and 19.5 trillion yuan, or US$2.5 trillion and US$3 trillion), and the debt owed by state-owned enterprises (another 16 trillion, he said). But with interest of two trillion per year, he thinks things will unravel quickly.

Secondly, that the regime’s officially published inflation rate of 6.2 percent is fabricated. The real inflation rate is 16 percent, according to Lang.

Thirdly, that there is serious excess capacity in the economy, and that private consumption is only 30 percent of economic activity. Lang said that beginning this July, the Purchasing Managers Index, a measure of the manufacturing industry, plunged to a new low of 50.7. This is an indication, in his view, that China’s economy is in recession.

Fourthly, that the regime’s officially published GDP of 9 percent is also fabricated. According to Lang’s data, China’s GDP has decreased 10 percent. He said that the bloated figures come from the dramatic increase in infrastructure construction, including real estate development, railways, and highways each year (accounting for up to 70 percent of GDP in 2010).

Fifthly, that taxes are too high. Last year, the taxes on Chinese businesses (including direct and indirect taxes) were at 70 percent of earnings. The individual tax rate sits at 81.6 percent, Lang said.

Once the “economic tsunami” starts, the regime will lose credibility and China will become the poorest country in the world, Lang said.

Again, more at the link. I daresay Prof. Lang is regretting his frankness right about now! The Chinese authorities are notorious for regarding open discussion of their economy in the same light as political dissent, even treason. I hope he doesn't suffer for his honesty.

Other authorities agree with many of Prof. Lang's points. For example, Reuters reported last month that 'China's debt pileup raises risk of hard landing'. Also last month, Gordon Chang (author of a best-selling book - albeit dated by now - titled 'The Coming Collapse Of China'), called that country 'The Next Greece'.

Everything in the manufacturing sector should be rosy: This is Christmas season in China. Factories should be working around the clock, and cargo ships need to be leaving Chinese shores loaded to capacity. But container lines are not fully booked at the moment. Maersk, the world’s largest container shipping company, reports its vessels on the Asia-to-Europe and Pacific routes are only 90 percent full when they should be loaded to the gills. Airlines are even grounding cargo freighters due to poor demand.

China’s three-decade bull run — what analysts call a supercycle — looks like it is ending. In the past, Beijing could always ramp up growth through stimulus, either spending directly or forcing its state banks to lend, as it did beginning in November 2008. Yet that tactic now looks off the table because it would aggravate now-serious inflation, and because the country’s financial institutions made too many questionable loans during the last round of government-dictated spending.

There is, in reality, a debt crisis in China. Beijing maintains that its sovereign obligations amounted to only 17 percent of its gross domestic product at the end of last year, but China’s official numbers omit the so-called hidden liabilities, such as the debt of local government financing vehicles.

There is disagreement as to how much debt the central government is really carrying. Some put the debt-to-GDP ratio at 89 percent and others believe it’s closer to 160 percent. At 160 percent, China’s ratio is worse than Greece’s.

Just about everyone knows that the Chinese economy, as Premier Wen Jiabao famously said, is “unstable, unbalanced, uncoordinated, and unsustainable.” Yet he has done little to correct these “four uns” even though he is the official in charge of the economy.

No one in Beijing is willing to take the steps necessary to put the economy on a sustainable basis. Everyone knows what to do; they’re just not doing it.

Greece is small, but its default is rocking global markets. Just think what the coming failure of China will do.

Again, more at the link. Here's Mr. Chang being interviewed today about China by Stefan Molyneux of Casey Research. I highly recommend watching this video clip in full - it contains some truly astonishing claims and insights. If you prefer to read a transcript, it's available here.

So, no, I don't think I was being unduly pessimistic about China's economic prospects in my earlier article. I'll be watching that country with intense interest . . . and also foreboding, because its economic woes will inevitably make ours worse too. What will happen when Suzi Consumer finds that formerly cheap Chinese-made TV's, clothes, etc. are suddenly much more expensive?

I read an article in Forbes, which leads me to ask: are there two parts to this economic collapse? Part one being the collapse and the fallout for the Chinese population, and Part Two involves the people who are holding all the wealth. Is it possible to have Chinese and Asian wealth play two different roles in the collapse? I'm in the middle of the G. Chang book, but it was published in 2001 and so much has happened since then, in China and here, that I wish Mr. Chang had written a sequel more current to address some of these natural changes.
I found his website and keep going back and forth between it and the book, but it's 2011 now and the Euro is hanging by a thread and it's crazy out there. Sorry to be so long-winded.

I'd think just the existence of the officially-acknowledged Chinese "ghost cities," the huge building projects that are built not for new residents but simply to keep people employed, would sound all sorts of alarm bells as to problems inside the PRC.