The New York Times' 'Dealbook' blog reported a couple of days ago on the 'plight' of staff laid off on Wall Street. Its article included this gem:

Sam Meek, 27, who was laid off in September when his Connecticut hedge fund decided to downsize, used to spend $500 on charity dinners and lavish golf outings. Now, it’s home-cooked meals and beer on the sofa. Recently, Mr. Meek and his roommate, another unemployed banker who spoke on the condition of anonymity because he did not want to jeopardize his job search, sat together in the kitchen filing for unemployment and drinking a bottle of Champagne.

The 'Dealbook' editor was surprised that the response from readers to the article in general, and that extract in particular, was . . . shall we say, 'not polite'?

Reader responses about the new challenges facing these low-level employees ranged from mild schadenfreude to fiery wrath. (Put it this way: The comment-moderation queue would make Andrew Dice Clay blush.) 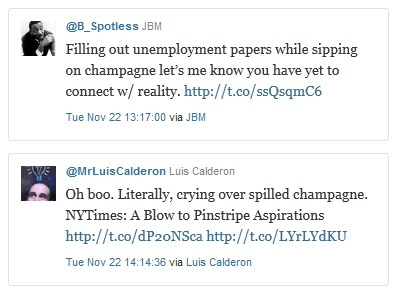 I think the author of those articles might want to get a clue about how most of the rest of us live, before expecting us to sympathize with anyone who's filing for unemployment whilst sipping champagne!!! Talk about 'crass' . . .

Maybe the poor souls were forced to drink it warm in order to save money on refrigeration?

Probably headed for a job in politics.

Yes, several years in flyover country would change the perspective of a lot of the Ruling Class.

You note that Congress-critters find housing in DC--and after only a couple of years they've 'put on the garment' of DC?

When I got laid off in Texas, it took me about two minutes to file my UEC online.

But it was too early in the day for me to be drinking beer.

Perhaps it wasn't quite the usual top-shelf bubbly. Or, perhaps they had tapped the champers reserve built up in the good times. Waste not, want not.

Gotta tell ya, I have been reading Barry Ritholtz' Bailout Nation and I am getting so mad I can't see straight. I am now, where everyone else was two years ago, because I did not understand Wall Street.
Now? who gives a crap! They lost their jobs? What about those other people they helped put out of work? I hope these guys work their way down the ladder to Near-Beer, and then Crystal Light with fizz! ChutzbaH!