Following their explosive series of articles for the Washington Post, journalists Dana Priest and William Arkin have developed their material into a book of the same title. I found it fascinating and very disturbing. Here's one brief excerpt to illustrate how all-pervasive the 'security State' has become. It describes the inauguration of President Obama.

As Obama stood at the podium at the base of the U.S. Capitol, he faced a sea of hopeful citizens stretching well beyond the towering figure of President Abraham Lincoln, watching from his giant marble memorial at the end of the National Mall. But between the new young leader and his supporters were five tons of bulletproof glass, and beyond that 20,000 uniformed guards and 25,000 law enforcement officers enveloping him in a security blanket that spanned from New York to West Virginia. Beyond that, an invisible classified universe of top secret agencies and programs and weapons systems and surveillance capabilities and legal authorities and strike forces and pursuit teams assembled to keep him safe. 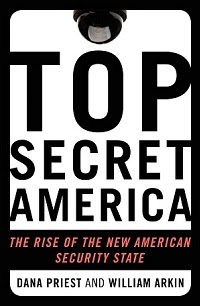 [The FBI security coordinator for the inauguration] went back to his task of keeping the new president and his supporters safe. His job that day was to track everything trackable within the FBI’s authority: incoming foreign intelligence reports transmitted through CIA headquarters in Langley, Virginia, intercepts and wiretaps, undercover intelligence squads mingling in the crowds, chemical weapons teams collecting air samples, sharpshooters with high-powered telescopes stationed miles away along I-95 North and I-95 South to spot anything unusual heading into the nation’s capital.

He, and the FBI, were not, of course, alone: within the U.S. Secret Service in the lead for the inauguration, fifty-six federal, state, and local agencies drew on their most sophisticated technology and skilled personnel. Bomb squads and HAZMAT units from a dozen organizations were ready to deploy, as were SWAT teams, crisis negotiators, and even behavioral analysts to scour intelligence and news reports for hints of trouble. Automatic license plate readers recorded and checked the license plate numbers of virtually every vehicle nearing Washington, DC, from incoming routes through Virginia and Maryland. Even particles of dust floating through the city were captured and analyzed at split-second intervals by navy plume assessment teams and the Department of Homeland Security’s pathogen detectors, mounted onto standard air-quality monitors to sniff out anthrax, tularemia, and other deadly substances. The local Washington government had squirreled away nearly a million respirators and over 2.5 million surgical masks for medical personnel in case of an outbreak.

As all this was going on, dive teams and Coast Guard boats patrolled the Potomac and Anacostia rivers while, overhead, layers of aircraft capped the largest protective bubble in the world: Air Force F-22 Raptor fighters and Air National Guard RC-26 surveillance aircraft flew above Customs and Border Patrol Blackhawk helicopters, while even higher, surveillance drones relayed real-time, full-motion video back to the dozens of stationary and mobile command centers that were lashed up with the military’s many geospatial Google-Earth-like data feeds.

Some may say that this plethora of precautions is no more than appropriate in the world in which we live. Unfortunately, that ignores the reality that such security apparatuses (apparati?) are all too easily turned against the very citizens they were initially designed to protect. It's a slippery slope from 'investigate and target terrorists', to 'investigate and target political opponents of the present Administration', to 'investigate and target anyone who wants to change the way this country is governed'. It's happened all too often before - witness the FBI's surveillance of US citizens by misusing so-called 'national security letters', or its earlier COINTELPRO program. There are many unanswered questions concerning other US government agencies and their surveillance methods and programs (e.g. ECHELON, CARNIVORE, Room 641A, etc.).

The authors pointed out some troubling statistics in one of their Washington Post articles:

Given that enormous investment of resources, personnel and facilities in a vast network of secret agencies (which, by definition, are not nearly as susceptible to supervision and oversight as their more public counterparts in the US government), the possibilities for, not just erosion, but outright subversion of our Constitutional rights, freedoms and liberties are frightening indeed.

I highly recommend reading at least the authors' articles at the Washington Post, if not their full book, to learn more about this very worrying state of affairs. The problem is, now that this 'secret State' has been erected, how do we go about dismantling it? It's highly likely no one person knows just how large it is, or how widespread its tentacles may be!

Think of how much money was spent on that inauguration.
Are we going to have sterile areas similar to the Bubble Boy in Texas to keep the POTUS from catching so much as a cold?
The whole point of our Republic is stability through the democratic process and a clear chain of succession. We should not have to fund this much security. That is what the War Department* is for. And the Police for domestic concerns.

There are so many of us, living cheek-to-jowl, with instant access to communication, that those of us who do not wish to live under our Constitutional system have become a force of their own.
We have become a we-against-them lot, with one-upmanship becoming the central goal, not what is best for all based on the Constitution. The funny thing is those who don't like it here won't leave, and shouldn't have to. What a conundrum! :)