Electronic warfare goes on the offense


In my days of wearing a uniform, electronic warfare was primarily defensive in orientation: listening for enemy transmissions, classifying them (e.g. type of radar, its location [determined via cross-bearings], jamming or 'spoofing' tools needed to render its threat manageable, etc.), decoding or deciphering them in the case of signals, perhaps feeding spurious instructions and commands into a defensive network to cause confusion so that attacking aircraft could penetrate enemy airspace, and so on.

A few months ago, I noted that new developments seemed set fair to make electronic warfare more offensive in nature. That's becoming a reality faster than I could have imagined, if a report today in Ares is to be believed.

The U.S. has built, flown, pointed and triggered a missile designed specifically to carry a directed-energy weapon. That payload, expected to be operational soon, will be able to disrupt, shut down, spoof or damage electrical systems, but little has been revealed about the project.

However, various clues have provided substantive details about the design and concept of operations (conops) for the new missile and its exotic payload. They come from Boeing officials, industry specialists and U.S. Air Force Research Laboratory sponsors who are working on the Counter-electronics High-power Microwave Advanced Missile Project (Champ).

An illustration created by Boeing shows the missile being dropped by a B-52, which means at least some versions of the design are air-launched. However, the directed-energy, high-power microwave (HPM) payload also is designed for integration into land, sea or other air-based platforms for operational flexibility.

As to the warhead’s anti-electronics capabilities, “the whole radio frequency spectrum is viable as a target,” says Keith Coleman, Boeing’s program manager for Champ since 2009. The systems will be tailored to the target defined by the customer. The effects will depend on the frequency and effective radiated power (ERP). There are many options. 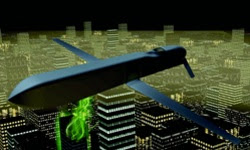 The notional airframe shown in Boeing’s drawings is relatively small with compressed carriage wings that extend after launch. While Boeing’s artist concepts are not exact representations of the missile, they do resemble the company’s cruise missile designs that are similarly air-launched and have low-radar-signature designs to penetrate enemy air defenses.

Champ was first flown on May 17 at the Utah Test and Training Range at Hill AFB. The missile was successfully pointed at a series of targets to confirm that it could be controlled and timed to fire a focused beam that would minimize—and perhaps eliminate—collateral damage to nearby electronic devices. The software used in the test was identical to that required to trigger the HPM weapon warhead.

“Any unmanned aircraft would be a candidate for these types of systems,” Coleman says. However, “Boeing built the Champ system to be easily transitioned to [alternative platforms]. From the start we designed it with as many features as possible so that we would need minimum adjustments.”

Program officials will not address the question of whether Champ is associated with the Air Force’s Long-Range Strike (LRS) program. Air Force and aerospace industry officials have said that directed-energy weapons support and electronic attack will be supplied to LRS by adjunct, unmanned aircraft.

“Champ is a template for future HPM programs,” Coleman says. “There has never been this type of system with this kind of power out on any vehicle of any sort before.”

Coleman contends there would be little difficulty putting the HPM weapons technology on a smaller or larger airframe.

“The HPM system itself is a very flexible integration,” he says. If smaller, you get less ERP and if bigger you get more. But if you are smaller, you can probably get closer [to the target without being detected]. I absolutely think there is a desire to go to a bigger airframe. ERP is dependent on the size of the aperture. The bigger the aperture, the more power you can produce and the more standoff you get.”

Raytheon’s newly acquired New Mexico-based Ktech division built the HPM warhead. The combination of airframe and warhead are to be demonstrated during a series of flight tests planned to cluster around the end of the current program in July 2012.

Raytheon recently acquired Ktech because it is making plans to build a series of HPM warheads for virtually all the missile models on its various production lines. A few years ago Raytheon planners said they were “betting the farm” on HPM pushing aside lasers as the most tactically useful and least demanding directed-energy weapon for next-generation combat operations. Boeing, in a complementary mode, has been designing its unmanned combat aircraft designs to carry reusable, multi-shot HPM weapons.

You can read more about high-power microwave weapons (so-called e-bombs) here, and a set of frequently asked questions about them here. There's also a comprehensive article about them by Dr. Carlo Kopp here (although, being from 1996, it's a little dated in technological terms). All make interesting reading.

HPM weapons might well revolutionize warfare as we know it. I listed several possibilities for their use in my earlier article. There are many more that come to mind, particularly given that Raytheon's warhead capacity on its small MALD-V guided weapon is only about 50 pounds. If an HPM weapon can be made that small, and still be effective, it can be deployed almost anywhere, on almost any platform. You could conceivably equip an infantry patrol with rocket launchers or UAV's that could take out an enemy command center, or tank platoon, or missile launch/guidance unit, without needing support from the air to do so. They'd do so, not by destroying it, but by rendering its electronics temporarily or permanently inoperative.

Somehow the term "Traffic Stop" comes to mind. A 50 pound unit installed on a patrol car that would make pursuits a thing of the past. Gee, could military weapons development have civilian benefits?

I've dreamed of just such a thing since the first time some git pulled up next to me at a stoplight with his stereo turned up loud enough to rattle *my* teeth.

Somehow the term "Traffic Stop" comes to mind. A 50 pound unit installed on a patrol car that would make pursuits a thing of the past. Gee, could military weapons development have civilian benefits?

Max, that leads to my second thought: I could mount such a device in my truck, but how would I avoid disabling myself at the same time I roast my neighbor's stereo? The only conclusion I could reach was to drive something old enough to lack any substantive electronics: no electronic fuel injection, no computer-controlled anything, etc. That doesn't describe any patrol cars I know of. If--and it's a big if--the beam can be sufficiently controlled to be damaging in the desired direction, but harmless off the beam at a range of just a few feet, well, that would be neat indeed!

Dave, you just took it in a direction that hadn't occurred to me. Interdiction in the civilian market. Loud Stereo, Habitual Cellphone Abuser, Linear Amplifier on a CB Radio playing through your toaster? Fire up your Champ and shut them down.
Seems like something that restaurants, courtrooms and theaters could use to enforce anti-cellphone rules too.
Ah the possibilities...