That's the title of an article at Zero Hedge. In my opinion, the author's hit every single hot-button issue I've been raising here on the economy and US politics for the past few years, and added a few of his own. I think this might be the most important article I've encountered at Zero Hedge since I began reading that site, and one of the most important articles I've found anywhere this year.

As I observe the zombie like reactions of Americans to our catastrophic economic highway to collapse, the continued plundering and pillaging of the national treasury by criminal Wall Street bankers, non-enforcement of existing laws against those who committed the largest crime in history, and reaction to young people across the country getting beaten, bludgeoned, shot with tear gas and pepper sprayed by police, I can’t help but wonder whether there is anyone home. Why are most Americans so passively accepting of these calamitous conditions? How did we become so comfortably numb? I’ve concluded Americans have chosen willful ignorance over thoughtful critical thinking due to their own intellectual laziness and overpowering mind manipulation by the elite through their propaganda emitting media machines. Some people are awaking from their trance, but the vast majority is still slumbering or fuming at erroneous perpetrators.

Both the Tea Party movement and the Occupy Wall Street movement are a reflection of the mood change in the country, which is a result of government overreach, political corruption, dysfunctional economic policies, and a financial system designed to enrich the few while defrauding the many. The common theme is anger, frustration and disillusionment with a system so badly broken it appears unfixable through the existing supposedly democratic methods. The system has been captured by an oligarchy of moneyed interests from the financial industry, mega-corporations, and military industrial complex, protected by their captured puppets in Washington DC and sustained by the propaganda peddling corporate media. The differences in political parties are meaningless as they each advocate big government solutions to all social, economic, foreign relations, and monetary issues.

The reason middle class Americans are being methodically exterminated and driven into poverty is the monetary policies of the Federal Reserve. Since 1971, when Nixon extinguished the last vestiges of the gold standard and unleashed politicians to spend borrowed money without immediate consequence, the U.S. dollar has lost 82% of its purchasing power using the government manipulated CPI. In reality, it has lost over 90% of its purchasing power. The average American, after decades of being dumbed down by government sanctioned education, is incapable of understanding the impact of inflation on their lives. As their wages rise 2% to 3% per year and inflation rises 5% to 10% per year, they get poorer day by day. The Wall Street banks, who own the Federal Reserve, step in and convince the average American to substitute debt for real wealth in order to keep living the modern techno-lifestyle sold to them by mainstream corporate media.

The oligarchy of moneyed interests have done a spectacular job convincing the working middle class they should be angry at 20 year old OWS protestors, illegal immigrants and the inner city welfare class, rather than the true culprits – the Federal Reserve, Wall Street banks and mega-corporations. This is a testament to the power of propaganda and the intellectual slothfulness of the average American. U.S. based mega-corporations fired 864,000 higher wage American workers between 2000 and 2010, while hiring almost 3 million workers in low wage foreign countries, using their billions in cash to buy back their own stocks, and paying corporate executives shamefully excessive compensation. The corporate mainstream media treats corporate CEO’s like rock stars as if they deserve to be compensated at a level 185 times the average worker. The S&P 500 consists of the 500 biggest companies in America and while the executives of these companies have reaped millions in compensation, the stock index for these companies is at the exact level it was on July 9, 1998. Over the last thirteen years workers were fired by the thousands, shareholders earned 0% (negative 39% on an inflation adjusted basis), and executives got fabulously rich.

Our entire system is designed to control the thoughts and actions of the masses. In many ways it is done subtly, while recently it has become more bold and blatant. It is essential for the ruling elite to keep control of our minds through media messages and the educational system. It is not a surprise that our public education system has methodically deteriorated over the last four decades. The government gained control over education and purposely teaches our children selected historical myths, social engineering gibberish and only the bare essentials of math and science. The government creates the standardized tests and approves the textbooks. We are left with millions of functionally illiterate children that grow into non-critical thinking adults. This is the exact result desired by the 1%. If too many of the 99% were able to ignore the media propaganda and think for themselves, revolution would result.

There were 400 pages of Federal Tax rules when the 1% personal income tax was implemented in 1913. Did the 18,000% increase in tax rules since 1913 benefit the average American or did they benefit the 1% who hires the lobbyists to write the rules which are passed into law by the politicians who receive their campaign contributions from the 1%? 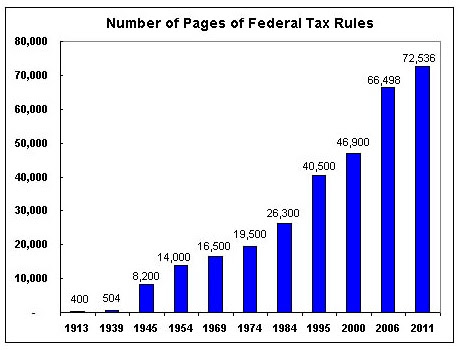 Do you ever wonder why you pay more taxes than a billionaire Wall Street hedge fund manager? Do you think our tax system is designed to benefit billionaires and mega-corporations when corporations with billions of income pay little or no taxes? Complexity and confusion benefits those who can create and take advantage of the complexity and confusion. Corporations and special interests have used their wealth to bribe politicians to design loopholes, credits, and exemptions that benefit their interests. The corruption of the system is terminal.

There's much more at the link. It's hard to read, because the truth is so depressing, but I think he's right on the money. Very highly recommended - indeed, I believe it's essential reading. You can't afford to miss this one.

A tip o' the hat to Zero Hedge for a superb and very timely article.

Peter, Jim Quinn of "The Burning Platform" wrote the article.

It may be published at 'The Burning Platform' as well as at Zero Hedge, but I've no idea who authored it. 'Tyler Durden' is clearly a pseudonym, but neither site gives an alternative author's name. As with so many of these articles, they're published on multiple Web sites (and with good reason, too).

I've been screaming for years. No one was listening then, and hell, as Durden notes, no one is really listening now.

My throat is sore. I'm just going to get my colander ready and get ready to surf the apocalypse. Sure, I might die, but at least then I won't have to care anymore.

I have read and bookmarked this link. Thank you. My stomach is holy and my brain distressed. We have been deadened by electronic toys and subtly-messaged films, fed to us by Hollywood socialists. Nobody wants to listen. People watch DWTS and such crap, but never open a book. The drivel that's being fed by a bought media is stunning. I am so glad my parents are not alive to see this disaster.

I would like the author of the article to explain to me how corporations can pay taxes.