A few months ago I published an article about 'The T-6 Texan in South African service'. This world-famous training aircraft served with the South African Air Force (SAAF) from 1940 until 1995 (where it was known as the Harvard, rather than the Texan, following Royal Air Force nomenclature). Several examples are still flying with the SAAF Museum in that country.

A reader in South Africa, Hannes S., came across that article, and sent me the two photographs below. He describes them as follows (I've translated his Afrikaans e-mail into English):

The first picture shows a very low pass by a single Harvard over a group of Army candidate officers on the Atlantic coast near Saldanha Bay. The second shows the same aircraft leading three other Harvards. (Click each image for a larger view.) 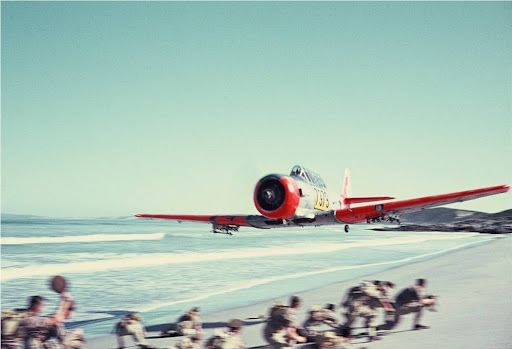 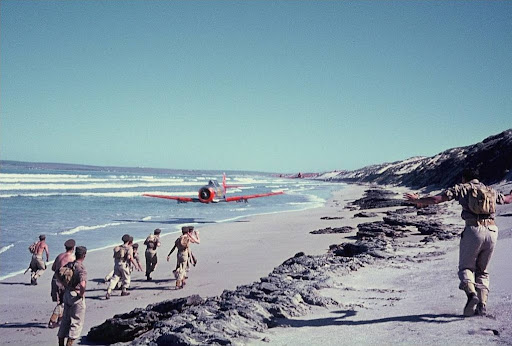 The pilot of the lead aircraft, Quentin Mouton, is currently Chief Pilot of Mango Airlines in South Africa. He said the following about these pictures on a South African aviation forum:

We were 590 hr pilots at the time and the whole thing was illegal, stupid and needless to say, dangerous.
The low flying limit was 200ft (or above, not below).
I would have been court-martialled if the SAAF knew. Too late now.
These pictures were taken 2nd October 64. I was the pilot. The pictures are original and not 'touched up'.
The 'Pongos' were on a route march from Langebaan by the sea to Saldanha.
The previous night in the pub one of them had said: "Julle dink julle kan laag vlieg maar julle sal my nooit laat lê nie" ("You think you can fly low, but you'll never make me lie down"). Hullo!!!
I went to look for them on the beach in the morning and was alone for the one picture. I was pulling up to avoid them.
In the afternoon I had a formation with me and you can see the other a/c behind me. (piloted by van Zyl, Kempen and Perold)
A friend by the name of Leon Schnetler (one of the pongos) took the pics.
The guy that said "Jy sal my nie laat lê nie" ("You won't make me lie down") said afterwards that he was saying to himself as I approached: "Ek sal nie lê nie, ek sal nie lê nie" ("I won't lie down, I won't lie down") and when I had passed he found himself flat on the ground.
Memories from the past.
Quentin Mouton (23,000 hrs, everything up to B747-400, presently Chief pilot MANGO Airlines and still actively flying B737-800 at 68)

I did indeed, Hannes, and I'm sure my readers will too! Thanks for sending them, and for the background information.

(I might add that I know that beach, too . . . I've walked it myself under similar circumstances!)

Gone are the days when you only told those tales. Now there are photos as well. The modern miracle of the net. :) Many thanks.

Please take a look at this.
Miniature Operational Airport
http://www.dailymail.co.uk/news/worldnews/article-1383532/Knuffingen-Airport-German-builds-worlds-largest-model-airport.html

It's such a great airplane. I've got a little time in one. Funny, today's post was about the Stearman, another favorite airplane. Great pics, I'd never seen those.