Following yesterday's first instalment in this Thanksgiving weekend series about menu items where no-one's yet succeeded in eating the whole thing in one sitting, here's the second.

The pizza is the brainchild of John Bogdan, the now-retired founder of J&J’s, who created the 16-inch round deep-dish XL pizza. It includes sausage, pepperoni, mushrooms, green peppers, onions, green olives, black olives, ham, Canadian bacon, bacon bits, and mozzarella cheese and weighs about 6 pounds. The entire thing must be completed within one hour to win the challenge. 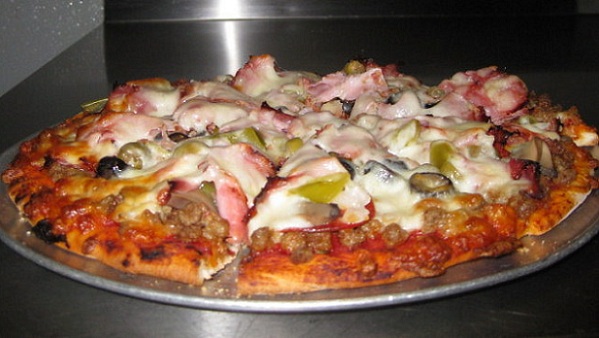 The pizza, which is intended to feed four to six people, has an estimated two to three challengers per year, and at least 100 people have attempted the challenge in the history of J&J’s. Surprisingly, the closest anyone has come in recent history to finishing the pizza was a 12-year-old girl, who ate 16 of the 20 pieces before she had to give in.

Six pounds of pizza??? Even during my youngest and most enthusiastic hunger pangs, I don't think I could have got through that much!

I can understand why it's their biggest seller. Not interested in the challenge, but I'd order it in a heartbeat. Definitely a take-home-the-leftovers dish!

I could eat for three days off that pizza.

Used to be a steak place in Tuscon called Pinnacle Peak's. If you could eat their 72 oz steak uncooked weight)with salad and your choice of a huge pile of steak fries or a huge baked potato the meal was free. I always had to pay

Wow, I remember Pinnacle Peak! ALMOST made the mistake of wearing a tie in the place the first time I went there. For those who don't know, there's a reason the wait staff carry scissors in holsters, and they DO use them.