A dog behind the wheel???


From reader Snoggeramus in Australia comes the link to this report.

SALES assistant Phil Newton could not believe his eyes when he saw a dog driving a 20-tonne, double-decker bus through Darwin's industrial zone.

"This was weird, even for the Territory."

Mr Newton, 30, said the dog was sitting in the driver's seat with its paws on the steering wheel.

He chased after the runaway bus, leapt through an open window and rammed on the handbrake.

"It ran for a couple of hundred metres, swerved across the road, went up on the footpath and was just about to run into a parked car when I stopped it," he said. 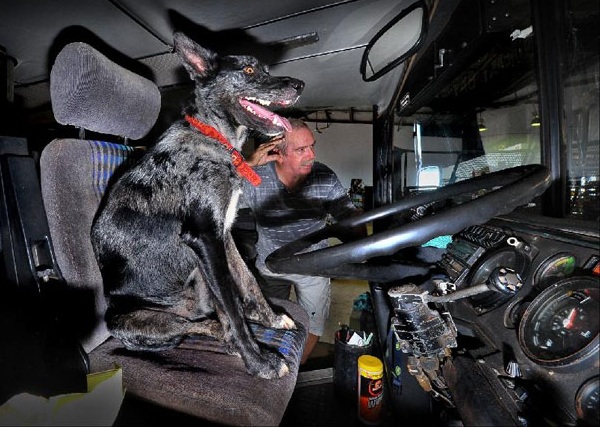 His owner, Richard McCormack, 62, said: "He sits next to me when I'm driving and in the driver's seat when I'm not.

"The handbrake is on the dashboard and he's seen me release it many times.

"He was just copying me. He's tried it on before."

I can't really nominate the owner of the vehicle for a Doofus Of The Day award, because let's face it - no-one could have expected or foreseen that! Still, I'd keep an eye on that dog from now on. If it can figure out how to compensate for the lack of opposable thumbs while driving, who knows what mischief it may have in mind next time?