Merton College and the space-time continuum


I recently came across a photo essay in the Telegraph titled 'Weird and wonderful university traditions'. Among them was this one:

As the oldest university in the English-speaking world with more than 20,000 students spread across more than 30 self-governing colleges, Oxford has a whole host of official and unofficial traditions. Perhaps one of the most bizarre is the Time Ceremony undertaken by Merton College students who in the early hours of the last Sunday in October walk backwards around the Fellows' Quad drinking port. The purpose is to maintain the space-time continuum during the change from British Summer Time to Greenwich Meantime.

Intrigued, I looked for more information. I found this seemingly 'official' Web site for the 'time walk', which elaborates:

The Merton Time Ceremony has no spiritual or recreational element like other Oxford ceremonies; nor is it an artificial ceremony conferring a status on those who participate. It is a purely temporal and practical ceremony, first held in its current form in AD1971, although it is suspected to have much earlier origins, possibly in the form of an ancient Celtic autumnal ceremony. It is designed to remedy the ill effects of modern man's abrupt interference with the diurnal cycle.

During that hour, the participants walk anticlockwise, in relays, around some suitably large horizontal area, which has, for reasons of convenience, always been Fellows' Quadrangle in Merton College, Oxford. The purpose and effect of this is to create a localised area in which natural time stands still for one hour, in the hope that into this well of depressed natural time thus created will flow sufficient natural time from surrounding areas to nearly equalise civil time throughout the country within about 24 hours, thus reducing by many days the time it would otherwise take nature (including mankind) to re-adapt its diurnal cycle after an abrupt "stationary jet-lag". 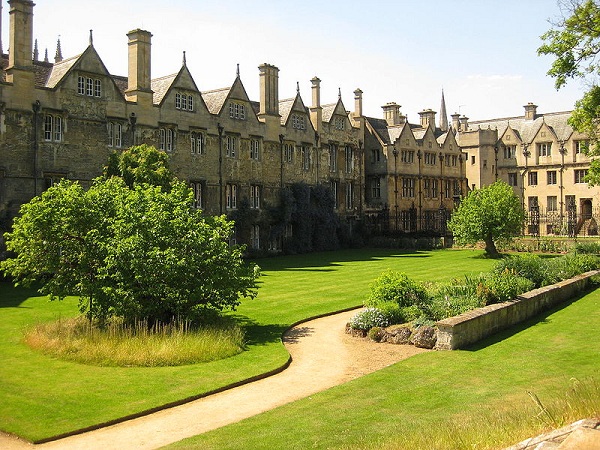 The ceremony is traditionally hosted by the Keeper of the Watch sending out invitations for the following Sunday "to take port around the sundial in Fellows' Garden at 1.30am for 2.00am passim". Accordingly, at about 1.30am on the Sunday, the participants congregate around the sundial, port is poured and introductions are made. There are traditionally three toasts, between about 1.40am and 1.55am: the first is "To a Good Old Time!"; the second, a joint toast to the sundial and the nearby ancient mulberry tree (morus nigra, f.), is "O tempora O more!"; the third is "Long Live the Counter-revolution!!"

Despite the wording of the invitations there is no circumperambulation in Fellows' Garden. After the third toast the participants leave the sundial and walk the 53 yards to the Tower of the Four Orders at the middle of the south side of Fellows' Quadrangle. At 2.00am precisely, according to the Keeper of the Watch, the participants walk backwards and anti-clockwise around the quadrangle. Initially everyone does so, each person completing at least two circuits, and the senior participants three or four, before stopping. Throughout the hour, participants make further circuits at their leisure, but ensuring that there are always at least two people maintaining the counter-revolution. Immediately before the end of the hour, those not already walking embark upon a final circuit so as to be walking when the hour is up.

It is not in principle essential to walk backwards. This is done partly to increase the solemnity of the occasion and partly because when one walks in a circle, one sees where one is going sooner if one walks backwards, but chiefly because it has always seemed the obvious thing to do.

Dress for the occasion is full academic dress: for men, that is dark suit, white shirt, white bow-tie, black shoes, and gown. Squares (or caps) should be worn. Graduates (other than doctors) wear hoods: this is indeed one of only four occasions on the University calendar on which hoods are worn.

There's more at the link, including rules for participants and a scientific (?) explanation for how the ceremony achieves its objectives. There's even a brief history of the event.

They obviously have WAY too much 'time' on their hands... :-)

Your link to the official page for the Merton Time Ceremony (http://freespace.virgin.net/barry.press/home/time/official.html) is dead. The correct link is now https://barrypressblog.wordpress.com