We continue our Thanksgiving look at dishes that no-one has ever successfully eaten in full. After our first and second episodes, tonight we go to That Bar in Danville, CA, which offers the semi-eponymous 'That Burger'. 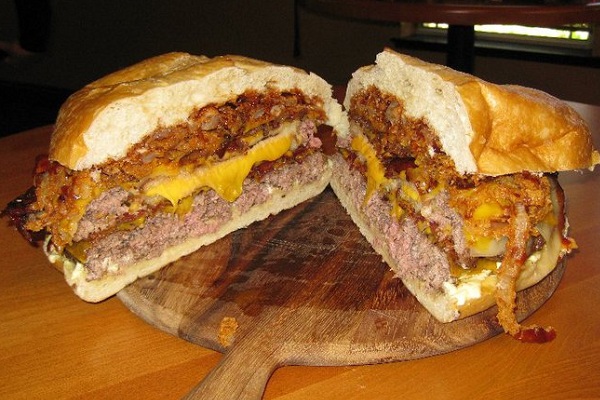 ... the monstrous mass of meat and cheese measures approximately 1 foot in diameter, and includes two 100 percent Angus beef patties, one of which has a hole in the middle where a grilled cheese sandwich is placed. Each patty is topped with four different cheeses — cheddar, American, pepper jack and Swiss — as well as a woven bacon patty. Finally, the burger is topped with crispy shoestring fries and doused in barbeque sauce, with an appropriately sized bun. The challenge also includes one-quarter pound each of fries and onion rings on the side.

In more than 40 attempts, nobody has been able to finish the challenge in the allotted time of one hour.

According to Foodbeast, That Burger weighs in at 5 pounds, excluding the side dishes. I'm getting a stomach-ache just looking at it! The thought of actually trying to eat the entire thing, on my own, is enough to bring on another heart attack . . .

I'd like two, to-go, and deliver them to Mayor Bloomberg. Oh yeah, extra salt.

How clean are their restrooms? :)

That one would TRULY feed a family of five! :-)

"includes two 100 percent Angus beef patties, one of which has a hole in the middle where a grilled cheese sandwich is placed."