This is the fourth and final instalment in our look at menu items that no-one's (yet) been able to eat in their entirety. It seemed an appropriate series for this Thanksgiving weekend, given the traditional over-indulgence in food at this time of the year.

We began this series with the Inferno Bowl from Florida, and continued with the Kitchen Sink Pizza from Indiana and 'That Burger' from California. We end (where else?) in Texas, with the Full-O'-Bull Platter at the Cowtown Diner in Fort Worth. The restaurant's Web site proclaims:

Branded as the world's largest chicken fried steak, this 64oz, gravy-slathered slab of tenderized top round runs $70, or $.00 if you actually take it down solo (see below paragraph for terrifying caveat). Ordering a day in advance is required, as the beast takes 45 minutes to prepare, starting with whole milk-bound breading that requires the chef to roll the meat up like a carpet to flip; then it's off to a flat grill for a hot-oil splash bath, a searing session aided by a steel pizza shovel, and a 10-min convection-oven bake to ensure even cooking, because inconsistency at bite #78 would totally derail your mojo. Including the XL pizza pan it's served on, the finished protein planet weighs 9lbs and measures 14in in diameter; to up the ceremony, the chef and a procession of servers actually carry it like the Ark of the Covenant to your table, good practice for when they later carry you out in a casket. 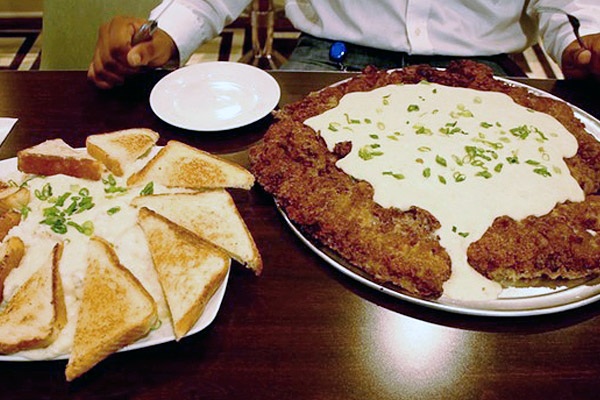 (Herewith, the terrifying caveat) Because no steak's complete without sides, the Bull isn’t considered finished until you also stuff in 6lbs of mashed potatoes and 10 slices of Texas toast. On the plus side, unlike the 90 minutes allotted some grudge-match eating deals, there's no time limit: you've literally got from 7am opening 'til 2am closing, and if you fail, they offer the consolation prize of doggy bags -- because you know what's a great idea? Eating chicken fried steak every day for a month.

Perhaps unsurprisingly, given the Full-O'-Bull Platter's 4 pounds of steak, 6 pounds of mashed potatoes and 10 slices of Texas toast, no-one's ever succeeded in finishing the thing at one sitting! I somehow don't see that changing anytime soon . . .

Throwing in that pile of sides is cheating, dammit!