Why Europe's economic woes are a (final?) warning for the USA


Two articles today make a very clear linkage between Europe's fiscal problems (about which I've written before) and our own. They're both worth reading in full, and reading again and again. I'm seriously worried that so few of our politicians seem to 'get it' about this issue.

First, National Journal points out the dangerous economic illiteracy displayed by all the Republican candidates for their party's Presidential nomination in 2012 during their debate yesterday.

Europe’s problems should absolutely terrify anyone who cares about the American economy; its sovereign debts could infect banks around the world, potentially triggering a new wave of financial crisis, and a European recession would drag on already slow U.S. growth.

But the candidates who assembled at the CNBC debate in Detroit treated those threats as a far-away nuisance, like famine in Africa or an earthquake in Mongolia: very serious, very sad, not our problem.

The debate lasted nearly two hours, but no candidate veered seriously ... toward Europe – which was the only the driver of a hefty nosedive in the stock market on Wednesday, and which could safely be called the biggest danger to the global recovery right now.

It’s stunning that a Republican field that includes a former ambassador, a former House speaker and two successful former businessmen – and which, to a candidate, gushed over the virtues of markets throughout the debate – so casually brushed aside the struggles of the world’s largest collective economy (the Eurozone is bigger, economically, than the United States) and America’s largest trading partner.

You don’t have to believe America should bail out Italy, Greece or the entire Eurozone – a straw-man concept that no one in Washington is even floating, but several candidates took pains to denounce on Wednesday night – to recognize that the United States has a role to play in averting another global financial crisis. At the very least, you should expect lawmakers, and presidential candidates, to be making plans for how to respond if the European crisis escalates.

There were no such plans to be found on the debate stage on Wednesday. Republican primary voters should start demanding some, right away.

There's more at the link. Worthwhile reading. (That's not to imply that Democrat politicians are any more aware of the importance of what's happening in Europe than their Republican counterparts - they're not.)

Next, the inimitable Karl Denninger lays it on the line. He speaks the truth. I'm going to quote him at length.

The market has discerned that Italy will not enact the actual government spending cuts necessary to bring revenues in line with expenses.

In the end analysis that is all that matters. Everything else is arm-waving and obfuscation; if you spend more than you make eventually you go bankrupt. Period.

All the monetarist claptrap is the product of a deluded mind or worse, an intentional lie. But none of the armwaving changes the perception of the market, and in the end that perception is all that counts.

The lesson from first Greece and now Italy must not be lost on our clowncar brigade in Washington DC: The government cannot spend more than it takes in via taxes.

Let's face the fundamental facts folks: Government spending is always -- without exception -- nothing more than a transfer.

The premise that government can avoid this fact is false. If government borrows to spend it simply time-shifts when that taxation will take place -- it spends now to pay later, exactly as you would were you to borrow to buy a car, a house, or a refrigerator.

The dynamic is exactly the same. The "monetarist" view that the government borrows money into existence and this "powers" the economy is nonsense. "Money" in that sense is merely a token; it does not "come into existence" as a consequence of government printing or borrowing it. Actual money is the fruit of labor and we use tokens such as paper bills and metallic coins to represent money as a means of lubricating commerce -- that is, giving the public a convenient way to exchange produced economic activity with desired consumption.

Credit money spends exactly as does produced money. In the economic parlance they're fungible; that is, exchangeable without distinction. As a merchant you have no idea if the person who walks into your shop bearing a $100 bill obtained it by picking strawberries or hitting the ATM outside your shop with his credit card, promising to repay the $100 later.

This charade must end. Europe is self-destructing over this exact paradigm -- promising "social benefits" that cannot be paid with current taxes, relying on the bond market to hand out ever more "cheap money."

Now the market has discerned that this scheme is in fact a racket and will inevitably lead to massive losses. It is thus withdrawing its support.

There is no option other than to cease the deficit spending -- both there and here -- right now.

I know what all the "pundits" tell you -- we can't do that right now, we have to wait until the economy is on a better footing and then we'll do it.

Sorry, that won't wash; this claim has been made for 30 years every time the economy turns down. We have never withdrawn the deficit spending. Ever.

This is the death spiral that has taken hold in Greece, where commerce and tax collection has essentially ceased, and now it is threatening to occur in Italy.

If we do not act now we will cross that line here in the United States -- and nobody knows exactly where it is, myself included. All we do know is that it's out there and we're perilously close to the point of no return and may already be beyond it.

Please understand that there is no solution found in tax hikes. You could literally tax all income over $250,000 (yes, at 100%) and not close the budget deficit. The primary entitlement programs currently consume all tax revenues -- Social Security, Medicare, Medicaid, Unemployment and Welfare/General Assistance (of its various programs) leaving nothing to pay the light bill say much less than dozens of additional departments in the Government. Nor have tax revenues covered the interest on the national debt. Worse, Medicare and Medicaid (medical) are growing in cost at 9% a year and have been for the last two decades -- which cannot continue as that chart of cost looks like this over the next 40 years, starting with $10,000 per person, per year: 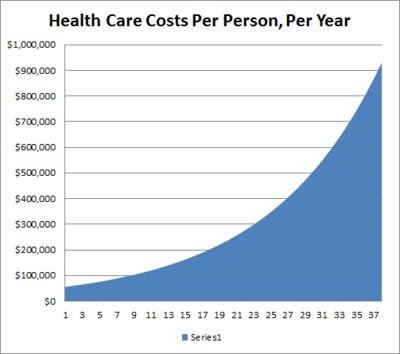 There is no way anyone is going to come up with nearly one million dollars per person per year for medical care, but that is exactly what you are being promised. It was and is a damned lie.

I understand that today's Seniors and those who will become Seniors (your author here is pushing 50!) were promised these benefits. I was promised them too. That promise was an intentional lie used to buy votes. The AARP should not be running ads on TV telling politicians "we'll vote you out if you don't give us a pony!" they should be calling for Seniors to occupy the Washington Mall and encircling the Capitol building right now demanding heads on plates for the lies that were sold to its members in exchange for votes -- political power -- over the last three decades.

That which cannot happen won't happen folks, no matter how many babies some politician kisses or how many slick lies he tells you while wearing a $3,000 suit. Arithmetic does not care about politics or votes; it just is.

We must stop this charade right now. Jim Cramer is screaming that "they need to buy some time" over in Europe. We cannot play the "buying time" game any more; there is no more time.

We must, right now, cut off the deficit spending.

It has to happen right now; we must accept that the promises made were lies, that the output in the economy over the last three years was false as the government has been borrowing and spending 12% of GDP and this cannot continue.

We must accept that the economy has to be allowed to adjust to the actual output of our people. This will be a massive and painful adjustment but it is unavoidable.

Again, more at the link. Bold, italic and underlined print are Mr. Denninger's emphasis. Please, do yourself a favor, follow the link, and read his entire article. This man knows whereof he speaks.

Our politicians seem constitutionally unable (no pun intended) to grasp reality. We've either got to get them to wake up and smell the coffee, or replace them with better ones next year . . . and frankly, I don't know whether enough of the electorate are willing to accept reality, and what it will cost all of us, in order to accomplish either task. Nor, for that matter, do I know whether there are enough political candidates available who both understand economics, and who have the courage to act on economic realities rather than pander to a self-indulgent, economically illiterate electorate.

"The blind electorate" is the problem. Not the banksters (who just gave their customers what they wanted), or the politicos (who just gave the voters what they wanted).
Had the public a brain, we wouldn't be in this situation.
But if the Politicos were to even look like they were to cut off the Free Government Stuff, out they go in favor of the guy who promises to keep it coming. President Bush made hints about Social Security priviatization, and look at the crap storm that raised.

Anyway, I'm thinking we're about to have a re-enactment of the First World war in the near future.