'Skullduggery' is a peculiarly appropriate description for the latest antics by the Democratic Party in Wisconsin - because skulls and digging are definitely involved! According to the Free Republic, the party advertised on its Web site for volunteers to help fill in petition forms to recall (Republican) Governor Scott Walker of that state, using names gathered from headstones in a cemetery! Here's a screen capture of the relevant page from their Web site (which they've since taken down). Click the image for a much larger view. 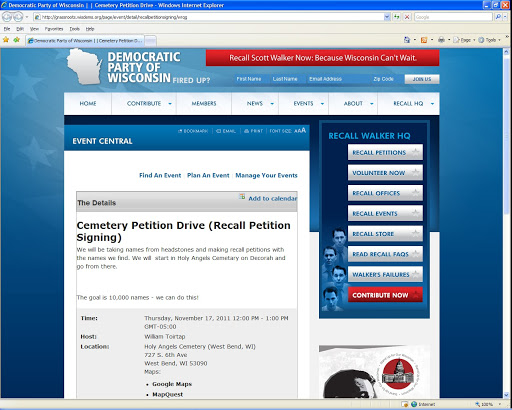 The story was picked up by the Free Republic, which has a long discussion thread about it.

I do hope someone forwards that screen-capture image to Wisconsin's Government Accountability Board, which supervises elections. I also hope someone cross-checks any petitions submitted by the Democratic Party in that state with the records of who's buried in local cemeteries. Finally, I hope someone informs the Justice Department about it as well (although given Attorney General Holder's dismal record of investigating past electoral malpractices, I don't expect he'll do much about this one either).

If this screen-capture is genuine, then it seems to me the Democratic Party has just handed Governor Walker, on a silver platter, the perfect argument to use before Wisconsin's Supreme Court in an application to dismiss any recall petition they submit. Quite frankly, if they're using tactics like these, they deserve to lose - the court case (if there is one), and the recall election (if there is one), and their present seats in Wisconsin's state government. I don't think I've ever seen such blatant, in-your-face cheating and illegal conduct by a US political party.

One thing discussed further downthread at the link. Anyone can make an event on that site with a throwaway e-mail address.
For a demonstration of that, someone added another event for slashing tires of republican get-out-the vote vans 'because of the success in 2008 of this measure.'