To honor the Thanksgiving weekend and its traditional over-indulgence, over the next few days I'll be highlighting restaurant offerings that have never yet been consumed in their entirety by any challenger.

Let's begin with the Inferno Bowl from Nitally's Thai-Mex Cuisine of St. Petersburg, Florida. According to CNBC:

The soup is served in a 48 ounce bowl and includes no less than 12 different peppers from around the world. Although the mix changes with the season, it always includes bhut jolokia (also known as the "ghost chili"). The chilies themselves comprise about 16 ounces of the soup. The restaurant uses both Thai and Mexican techniques to draw as much heat out of the peppers as possible.

Ally Valdez, who owns Nitally’s with his wife, describes how the dish was created: “My wife is from Thailand and my family is from Mexico...we always argued about who ate the hottest food. So, we went out of our way to find the hottest peppers we could use and made a soup that hardly any family members could eat.”

Valdez says that since the challenge began in 2009, 116 people have attempted to finish the Inferno Bowl. The closest challenger came within two spoonfuls before throwing in the towel. Others throw in more than that. The Inferno Soup is so spicy that the restaurant requires challengers to eat it outside, since about 40 percent of the challengers have vomited while trying to finish the soup within the 30 minutes allotted. 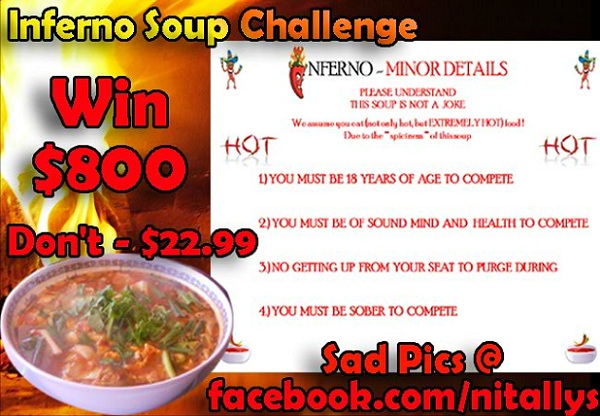 That's right - if you eat it all, they'll pay you $800. If you don't, you pay them $22.99 for the dish. Personally, I think I'll leave it to those with more asbestos in their alimentary canal than my parents and Creator saw fit to provide me, genetically speaking . . .

Thai-Mex? That's a recipe (some pun intended) for disaster from the start!

WV: gercerac -- the sound one makes after 2 spoonfulls of Inferno Soup.

I passed this on to a friend of mine, one with a cast iron tounge- a man who did hot sauce shots for his bachelor party- who will empty the entire side tray of chilis onto his food at a Thai resturant...
His response...HEEECK NO!!!