Reaching the heights, in more ways than one!


The 2011 Dubai Air Show is currently under way in the Middle East. As part of the fun and games, the French Air Force's Patrouille de France aerobatic team, flying red, white and blue Alpha Jet trainers, is performing there, along with Al Fursan ("The Knights"), the display team of the United Arab Emirates Air Force, flying black and gold Aermacchi MB-339 trainers.

The picture below shows Al Fursan in only its third public performance, leading Patrouille de France in front of the world's tallest building, the Burj Khalifa in Dubai, earlier this week. Open the image in a new tab or window for a larger view - it's worth it! 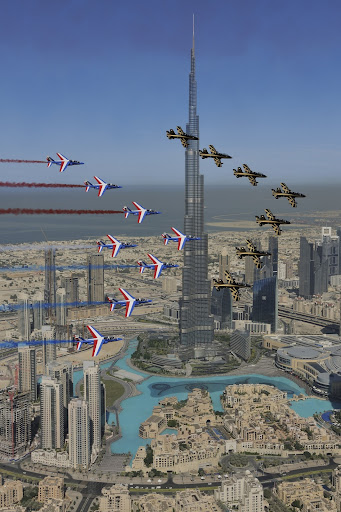 An even larger version of the image may be found here (click on the picture there to see it at full size). That's one of the more spectacular aviation shots I've seen recently. Congratulations to the photographer, Katsuhiko Tokunaga, who took the picture from a ninth Alpha Jet of Patrouille de France. That must have been a spectacular ride-along!

I may well be wrong, but the large photo looks photoshopped...

He was lucky to have a clear day. Most days the visibility is low because of dust.