What will they think of next?


I was amazed - and impressed - to read of a novel application of CAT scan technology to the world of music. The BBC reports:

Radiologist Steven Sirr first had the idea of using a CAT scanner to take images of violins in 1988.

He was an assistant professor at the University of Minnesota at the time and often brought his violin to his office to practise when it was quiet.

One weekend he was called to supervise the scan of a gunshot wound victim.

"I put the violin of the side on a table near the scanner and then after the patient went to surgery I turned round and saw my violin and thought - well it would be interesting to scan that," Dr Sirr told the BBC.

He had expected to see a wooden shell surrounded by air, but was proved wrong.

"There is a lot of anatomy - I'm used to evaluating anatomy in people and I saw a lot of detail that I had no understanding of, so I took the CT scan to my friend John Waddle, who is a violin maker, and I gave him the images," he said.

Over the following years the two men scanned many hundreds of instruments, including guitars, mandolins and other violins.

Scans of the older instruments revealed worm holes, small cracks and other damage that helped create their distinctive sounds. 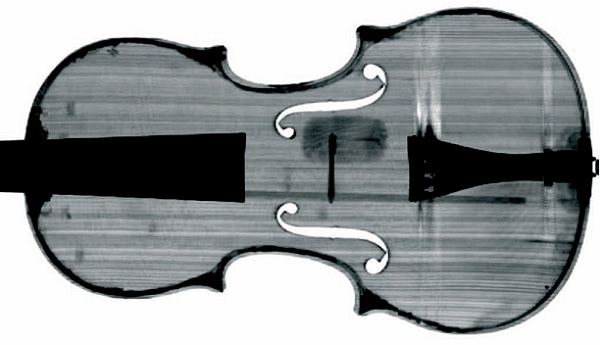 A CT scan showing density variation in the ‘Wilmotte’ Stradivari

Eventually the two men borrowed a Stradivarius known as "Betts" from the US Library of Congress which still had an original label placed by its Italian creator, Antonio Stradivari, inside its body.

Teaming up with another violin maker, Steve Rossow, they proceeded to create three replicas.

To do this they took more than 1,000 CAT scan images from the original instrument and converted them into a file format used to resemble three-dimensional object in computer-aided design (CAD) software.

"We used the scans to determine the density of the woods that made up the violin - that could only otherwise be done if the violin was dissected and measured - and of course that would never happen," Dr Sirr said.

The files were then fed into a CNC (computer numerical control) machine. It used the data to carve the violins' back and front plates, neck and the "scroll" carving at the neck's end using various woods picked to match the originals as closely as possible.

These were then assembled and varnished by hand.

"The copies are amazingly similar to originals in their sound quality," said Dr Sirr.

"When we make the violin we copy the changes that have occurred over more than 300 years including the shifts in the wood - the small deformations in the front and back plates that occur over time because of the forces of the strings and the other parts of the violin."

Dr Sirr said he hoped to repeat the process with other antique instruments and hoped that his work would one day pave the way for students to have access to "nearly exact copies" of the originals.

The dean of the world-famous Juilliard school in New York, welcomed the possibility.

"Every string player graduating from any great conservatory faces an immense crisis of how do you obtain a violin that is at the level that you need to have a really first rate career," said Ara Guzelimian.

If you're interested, there's a lot more information at the project's Web site, including a great deal of input from professionals in various disciplines. (For example, a violin-maker's perspective may be read here - link is to an Adobe Acrobat document in .PDF format.) There are even reference recordings played on the violins involved in the study.

Now, if they could marry this technology to the 3D-printed violin I mentioned last week, they might have something very interesting on their hands!