I'm chuckling at the story of Sahara, the sun-loving Arctic seal.

The hooded seal has already been rescued twice after spurning his cold native waters to swim 1,000 miles in the wrong direction to the warmer seas of the Mediterranean.

He first washed up on a beach in the Canary Islands and was flown to the National Seal Sanctuary in Gweek, Cornwall, to recuperate before being released again near the Orkneys. 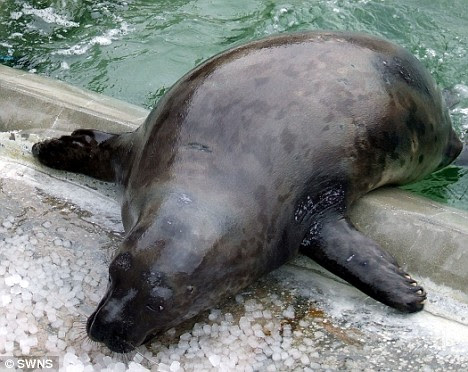 Animal care supervisor Tamara Cooper said instead of then heading back towards Greenland, he turned south again and made his way to Spain to be rescued a second time.

Sahara is now a permanent resident at the sanctuary and his carers are using a giant ice machine to try to cure his fear of the cold.

The machine, donated by Ipswich-based Hubbard Ice Systems, can produce half-a-ton of ice every day.

Staff said Sahara fled to the opposite end of his enclosure when they first started shovelling in the ice, but the cold treatment seems now to be working. 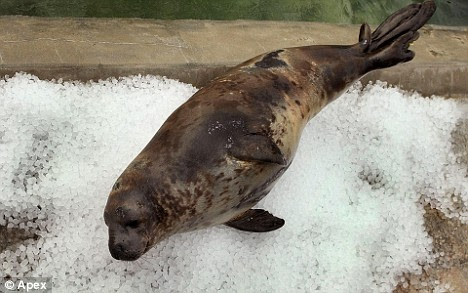 Ms Cooper said: 'It took a little while, but some memory from his pup-hood eventually seemed to surface and he came for a closer inspection.

'Once he'd had a sniff and then slid over the top of it for the first time he found he actually likes it.

'We don't think it will be long now before Sahara is a proper ice-loving Alaskan seal again.'

Seems a bit like cruel and unusual punishment to me! I mean, if the seal's sensible enough to prefer the warm, hospitable climate of the Mediterranean, isn't he showing remarkably evolved good sense?

Who knows? If Sahara can find a female seal who shares his love for sunshine, in a few centuries their progeny might evolve into a completely new variety of seal. How about the "St. Tropez Seal", complete with sunglasses, straw hat, and naturally-produced suntan oil oozing from their skins?

Perhaps these two are related?

Those caretakers are probably the same that believe in evolution and global warming. Yet they fail to see they are holding back evolution and the survival of the arctic seal species as this is clearly evidence of the seal evolving to the warmer climate to come with the threat of global warming looming on the horizon. A press conference should be set up where Al Gore can personally fly in by personal gas-sucking jet, so he can take the credit for this monumental achievement in global warming evolution history. Now we can only hope to see polar bears and penguins in the rain forest soon as they adapt to the doom that is global warming. I think I have to go hug a tree now and start looking for a prius.

Of course, they could be looking for warmer climates due to the massive refreeze and coming 'Little Ice Age' in a desperate search for food and no dying of hypothermia.