Doofi are appearing thick and fast, it seems. Doofus #60 is John Pearce of Dartford, Kent, UK.

As a burglar, John Pearce thinks nothing of turning his victims' homes upside down. But this time it was the house that turned him the wrong way up.

Attempting a daylight raid, the 32-year-old somehow got his foot caught after smashing his way through the front window of a Victorian terrace home at 6pm.

Unable to free himself, Pearce was left hanging upside down in the window frame for more than an hour as a crowd of 30 neighbours and passers-by gathered to ridicule him in Dartford, Kent. 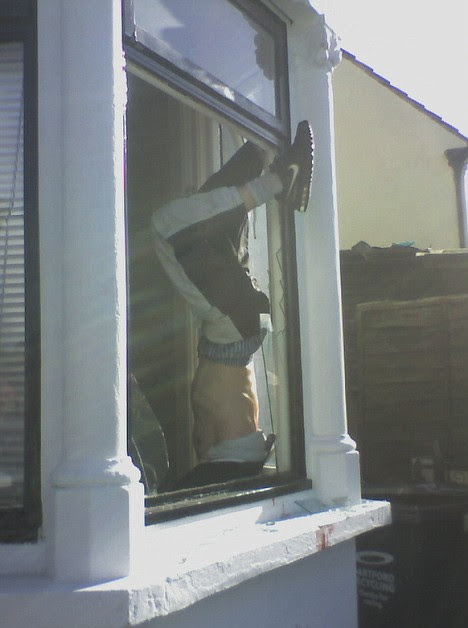 When owner Paul Ives arrived home from work, Pearce, who was armed with a hammer, tried to claim that he had spotted someone else trying to raid the house and had selflessly attempted to catch the scoundrel, getting stuck in the process.

Unsurprisingly, Mr Ives didn't believe his story and declined to set him free.

Police and paramedics arrived on the scene and eventually managed to release Pearce's shoe and haul him down. 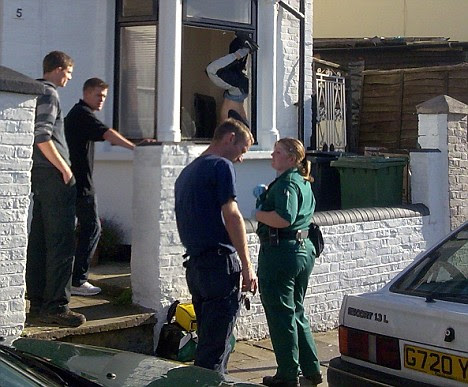 Facing Dartford magistrates the following day, he admitted burglary with intent to steal and will be sentenced on September 5.

Next-door neighbour Nicola Daniels, 34, said: 'I heard banging and thought Paul and Angela were moving their furniture into the house.

'They've only just moved in and they'd told me they were going to pop the window out to get it in.

'When the banging continued I went upstairs and looked out of the window and saw two feet sticking out of it. I thought it couldn't be right so I went outside and saw this man hanging upside down.

'He was screaming in agony and swearing and shouting, "I'm not the burglar" but I said, "Well, you are, aren't you?"

'I think he'd smashed his way through the small window at the top of the frame and just tried to get through so quickly that his foot had got stuck.

'Another neighbour called the police and there ended up being quite a crowd standing laughing at him. It's the main road to the station so it's quite busy.

'One man walked past and said, "Hang in there, mate". It was all quite funny.'

After breaking into a house while the family were away, the 27-year-old raider was found slumbering in one of the children's beds surrounded by his hoard of stolen goods.

Yesterday, he was jailed for two years at Portsmouth Crown Court.

Judge Ian Pearson heard that Gill had ransacked the house, in Fratton, where a mother lived with her 12-year-old son and ten-year-old daughter.

He picked up a rucksack and put a new Xbox console and games into it.

Gill, of North End, Portsmouth, also raided the boy's money box, which contained £120 he had saved up for his holiday.

He stuffed the cash down his trousers, went upstairs and promptly fell asleep.

When the family arrived home at around 11pm on July 27, they found Gill in one of the bedrooms.

He was still asleep when police arrived, and they had to struggle to wake him up. 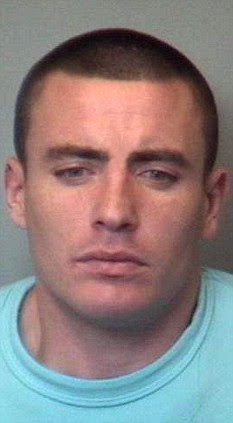 The 33-year-old single-mum said: 'When we got home I sensed something was not right.

'My daughter pointed out the light was on and that was a bit strange.

'I sent the kids into the kitchen to get their milk and cookies before bedtime and my daughter noticed glass on the floor. Then I saw the back door was smashed in.

'I rushed the children across the road to my mum's house and came back a few minutes later with some of the family and then went straight upstairs.

'I didn't spot him the first time. I looked in my son's bedroom and saw the Xbox on the bed.

'Then I looked to the side of the bed where there was a mattress and saw the head of this figure.

'I thought he must have knocked himself out by banging his head on the beams or something like that.

'It was a huge relief when the police arrived a few minutes later - but I think it took them a while to wake him up.'

In an interview he said he was deeply sorry for what he had done and told officers he had taken 15 Valium tablets on the night.

He admitted the burglary, plus another a month earlier when he took a TV from a university building.

PC Chris Dinenage, from Hampshire police, said: 'The idiocy of the offender led to his own downfall.'

Idiocy indeed! Taking an overdose of tranquilizers seems like a one-way ticket to bed at the best of times. When you try to commit a crime while falling asleep, it adds idiocy to insult and injury!

With criminals like these, an ongoing supply of Doofi for this regular feature seems assured.

I think these men need to be put down. As to help clean up the gene pool.