I took a few pictures of the damage left by the fire today, while walking around with the insurance assessor.

The first one shows the view looking in at the door of my study. The burning garbage container (a standard 32-gallon Rubbermaid unit) was next to the bookcase you can see on the left of the picture, about where the cardboard box is lying with its top towards the camera. (Click the pictures for a larger view.) 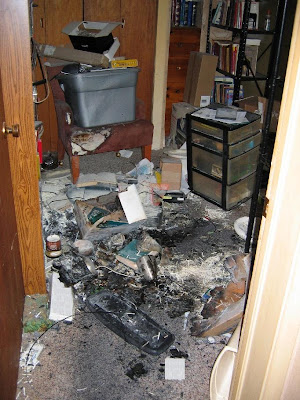 The next is taken inside the study, looking towards the bookcase and scene of the fire. The shredder was positioned where you see the red number 1, between the bookcases, set back against the wall. The garbage container was just about touching its left side, in front of the bookcase nearest the door, where you see the red number 2. You can see where the flames from the shredder and garbage can licked up the side of the bookcase, and damaged several books. (I'd already removed the worst-damaged ones before taking this picture.) 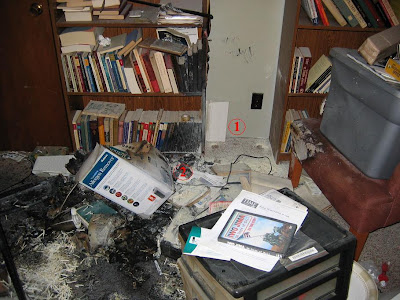 This shows the small walkway from the study (its door is out of sight to the right of this picture) to the living-room, passing the other two bedroom doors. The fire department guys had a merry time dragging debris out, as the carpet demonstrates! The once-white object on the right, and the other white object with steel legs leaning on the left, are both folding tables. 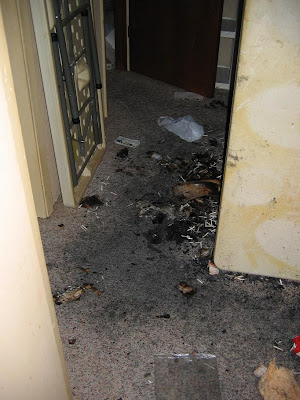 The final photograph, taken just inside my living-room, shows where the fire-damaged stuff was dragged around the corner from the walkway. It's amazing how much ash can fall off things like that, and get tracked into the carpet. The office chair shown wasn't burnt, but was heavily smoke-damaged. 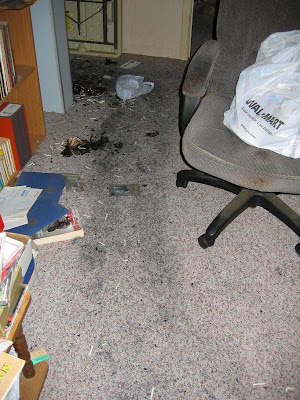 A few people have e-mailed, asking what make and model of shredder I owned. It was a 2007-model Fellowes Powershred SB15C, illustrated below. This is identical to the current SB-87CS unit. 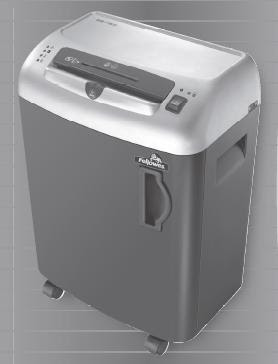 I'm not mad at Fellowes about this. Although the fire department was as sure as they could be that a short or other electrical fault in the shredder sparked the fire, that's something that can happen to any electrical or electronic device. I've owned three Fellowes shredders before this one, and never had a problem: and I'll likely end up buying an SB-87CS to replace my old one. They're very good. I don't think this fire is representative of all Fellowes' products.

Well, it's 3.42 in the morning, and I guess I'd better try to get some more rest. It's still hard to sleep properly, what with my lungs trying to get rid of the smoke I inhaled. Hopefully the Prednisone will kick in over the next day or two and make things easier.

Labels: Grrr, Me me me, Sad
Email ThisBlogThis!Share to TwitterShare to FacebookShare to Pinterest

Well, damn. What a shame. I feel for ya. Could easily have been much worse.

But soon all will be well again. The ash and soot will be gone, things will be replaced, life will be back to normal.

The sooner the better!

I hope you are feeling better soon. I have and will continue to pray for you.Rick

hope you're feeling better and that you got some good rest!