I'm fascinated by a report about tail-walking dolphins in Australia.

A wild dolphin is apparently teaching other members of her group to walk on their tails, a behaviour usually seen only after training in captivity.

The tail-walking group lives along the south Australian coast near Adelaide.

One of them spent a short time after illness in a dolphinarium 20 years ago and may have picked up the trick there.

Scientists studying the group say tail-walk tuition has not been seen before, and suggest the habit may emerge as a form of "culture" among this group. 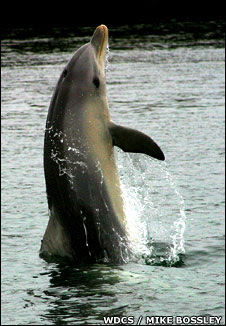 In the 1980s, Billie, one of the females in the group, spent a few weeks in a local dolphinarium recovering from malnutrition and sickness, a consequence of having been trapped in a marina lock.

She received no training there, but may have seen others tail-walking.

Now, other females in the group have picked up the habit. It is seen rarely in the wild, and the obvious inference is that they have learned it from Billie.

"This indicates that they do learn from each other, which is not a surprise really, but it does also seem that they exhibit elements of what in humans we would call 'cultural' behaviour," said Dr Bossley.

The "cultural" transmission of ideas and skills has been documented in apes, while dolphins off the coast of Western Australia are known to teach their young to use sponges as an aid when gathering food.

There's more information at the link in the BBC article.

I have visions of this report going missing among the detritus of history. Then, in another century or so, some future oceanologist is going to make a sensation by 'proving' that dolphins in the wild actually invented tail-walking!

Whole ocean full of brains! I saw a film clip of a pod of orcas who had learned that if they all swim toward a seal on a piece of pack ice, that their bow wave will wash the previously smug-looking seal into the water. Oddly, they weren't eating them (at the time) but it was fascinating to watch them coordinate their efforts like that.