Well, Gustav's almost here. New Orleans radar shows his eye clearly as it approaches. It's the open round feature almost directly below the North-South line of the border between Mississippi and Alabama. 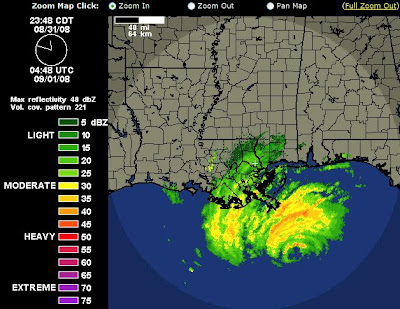 Predicted landfall for the eye is still around noon tomorrow.

Gustav's increased speed has really helped to keep his intensity lower. By spending less time over the hot water of the Gulf of Mexico, he's not been able to grow stronger than a Category 3 storm. There's some speculation that as he heads over the cooler waters closer to land during the night, his intensity might even drop to a Category 2, but that's unpredictable for now. The trouble is, these darn hurricanes can vary so much from one another! One can roar ashore as a full-blown Category 5, the next - on almost the same path - can limp along much more weakly. That's why the authorities simply can't take a chance. If a hit to a major center looks likely, they have to assume the worst-case scenario, and go for it.

Best of luck to you, man.