Who was she, and how did she get there?


I'm wondering about a skull recently discovered in New Zealand. 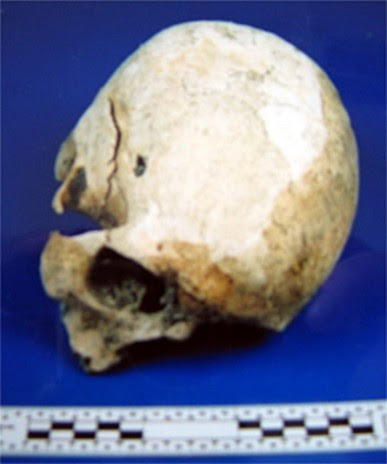 The discovery of a yellowing, cracked skull on a riverbank in New Zealand’s North Island had baffled scientists.

Their research has shown the skull belonged to a European woman who lived about 270 years ago – a century before the first known arrival of white settlers in the country.

Even an inquest into the woman’s death has failed to solve the mystery.

Coroner John Kershaw, sitting in the town of Masterton, 50 miles from Wellington, decided after hearing expert opinions at the inquest that the skull belonged to a European woman aged between 40 and 45.

‘This suggests that the deceased was alive somewhere in the South Wairarapa region (north-east of Wellington) in or about 1740,’ said Mr Kershaw.

Mr Kershaw said despite radiocarbon dating of the skull, historians had reported that the region was not settled by Europeans until after the New Zealand Company sent settlers to Wellington in 1840.

The skull was discovered in October 2004 by a local resident as he walked by the Ruamahunga River, south-east of the small town of Featherston.

Two Auckland forensic pathologists, Dr Rex Ferris and Dr Tim Koelmeyer, told the inquest that the skull was not Maori – the Polynesian people who were the first known inhabitants of New Zealand – and was almost certainly a European woman.

They said that conclusion could be drawn because of the study of the size of the skull, and comparison of specific parts of the skull, such as the cheekbones and jaw, with skulls of other races.

The woman’s identity and cause of death could not be ascertained, and a verdict that ‘death has occurred’ was recorded.

Well, the verdict was preordained, of course . . . but what a puzzle for history!

What ship wandered, lost, through those reaches of the Pacific? We have no historical record of a European-manned ship being lost there on a voyage of exploration at the time the woman must have reached New Zealand. Was it, perhaps, a trading vessel from a European colony or trading post in South America or South Asia, blown off-course by a violent storm, completely lost, sailing for weeks - months! - in search of land?

Who were the crew? How did at least one woman come to be among them? Women weren't usually allowed aboard as crew. She might have been the wife of a senior officer like the captain, or a high-ranking passenger being conveyed somewhere. What was her nationality? What language did she speak?

What must it have felt like, to be cast ashore in a strange land, with no "outposts of civilization" at all? How would she (and, presumably, other survivors) have felt, knowing that they didn't know where they were, they didn't know how to get home again, and they would never leave that place?

How did she die? Was it in fear, running away from a killer? Was it from disease? Starvation? (The latter seems unlikely in New Zealand, which is pretty fertile, and has wildlife one can hunt, but one doesn't know.) Was she a woman of faith? Did she cry out to her God for help, and die despairing because no help came?

If only her skull could tell her story . . .