I'm sure many of you have been watching the Olympics coverage on TV. I haven't - I cancelled my TV service a long time ago, given the utterly dismal quality of programming on virtually all channels - but I've been following the Games on the Internet, and enjoying what I've seen.

I'm interested to note online comments from ordinary Chinese people about how they resent the overwhelming security presence at the Games, which is causing huge disruptions in normal city life for Beijing residents. Others seem to be enjoying Chinese-language puns at the problems caused by the Games.

Beijingers' frustrations at the security measures and other restrictions which have been put in place over the Olympics are the subject of a biting text message joke.

"News flash: IOC President Jacques Rogge announces that because of China's enthusiasm and thoughtfulness, the next Olympics are going to be in Beijing too. Rumour has it state officials fainted and Beijing police led the wild cheers. Damn you, old man Rogge!"

Other Chinese have had fun messing around with word games, the tonal Chinese language being a gift to jokers, because a single pronunciation can have several wildly different meanings.

Thought the tender song You and Me at the opening of the Beijing Olympics was about peace and friendship? More like rising oil and food prices, some Chinese are saying.

"The Chinese name of the theme tune You and Me is 'You (oil) and Mi (rice)', an expression of concern about this year's oil and food problems ...," runs a Chinese-language joke being circulated online.

Those tired of Games overkill and the heightened security that has made normal life difficult in Beijing are being advised to take an "avoiding Olympics package" (bi yun tao) holiday, a phrase that also sounds like the word for condom.

The air pollution in and around Beijing has been brought under control, delivering surprisingly good conditions for the Games. The BBC published this picture of the Beijing skyline before and during the Games, showing the difference: 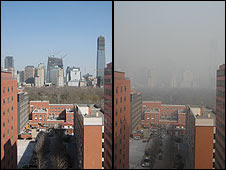 That's a pretty impressive improvement! My question: what will the citizens of Beijing do after the Games? Will they be content to go back to the old polluted ways, when the closed factories re-open and all cars are allowed back on the streets? This might be interesting to watch.

I'm also laughing at a satirical look by an Australian correspondent at that country's disappointing Olympic medal results (or the lack thereof). A sample:

But the chief culprits have been the swimmers, who failed us all. Why should we care so much about swimming, anyway? How can we be so interested in a sport that offers so little opportunity for meaningful sledging?

We don't give a gold medal to the person who's best at walking backwards. There's no reverse 100 metre sprint. Why should we treat people who swim backwards any differently? Butterfly is only marginally less idiotic. And breaststroke proves once and for all that we evolved away from amphibiousness for a reason.

For the Olympics to be seen as truly representative, these strokes should be abolished in favour of other, more universally practised styles. Dog paddle, sidestroke, the dry-hair-freestyle-with-slightly-camp-headflick - if these events had been included in the Beijing Games, Australia would have been riding high on the medals table from day one.