In June 1862, Messrs. French and Fancher patented what they called a 'New And Improved Ordnance Plow'. 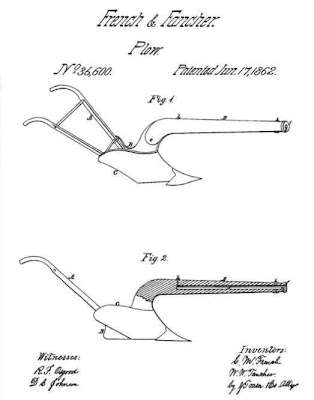 This remarkable device incorporated a muzzle-loading cannon, fired by a touch-hole in the breech, as can be seen in Figure 2 of their patent application above. They describe its use as follows:

As a piece of light ordnance its capacity may vary from a projectile of one to three pounds weight without rendering it cumbersome as a plow. Its utility as an implement of the twofold capacity described is unquestionable, especially when used in border localities, subject to savage feuds and guerrilla warfare. As a means of defense in repelling surprises and skirmishing attacks on those engaged in a peaceful avocation it is unrivaled, as it can be immediately brought into action by disengaging the team, and in times of danger may be used in the field, ready charged with its deadly missiles of ball or grape.

There's no record of this amazing piece of equipment ever being used in action. I'm glad it wasn't. I can think of a few handicaps.

First, I'd imagine that the news of such an infernal machine would spread very quickly. If I were a marauding guerrilla or cavalryman, I'd very soon learn to shoot anyone using a plow from long range, eliminating any possible threat before I got within range of his agricultural artillery.

Second, the muzzle of that thing would be nicely positioned to catch the, er . . . detritus dropped by the plow-horses at regular intervals. If you fired that at the other side, you could be charged with chemical, bacteriological and scatological warfare! I'm sure there's a treaty about that somewhere . . .

Third, if you kept it loaded, it might be detrimental to the health of your plow-horses. I've seen many pictures of farmers ambling along behind their plows, contentedly smoking a pipe. If some of the ash from the pipe got into the touch-hole . . . whoa, Nelly!

I wonder if there's a modern equivalent? A fully-automatic combine harvester, perhaps?