These pictures make me giggle, I'm afraid! As reported by CNN:

Cinderella, Snow White, Tinkerbell and other fictional fixtures of modern-day childhood were handcuffed, frisked and loaded into police vans Thursday at the culmination of a labor protest that brought a touch of reality to the Happiest Place on Earth. 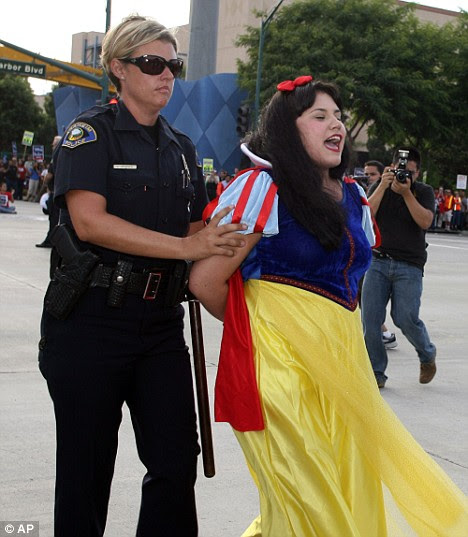 The arrest of the 32 protesters, many of whom wore costumes representing famous Disney characters, came at the end of an hour-long march to Disneyland's gates from one of three Disney-owned hotels at the center of a labor dispute. 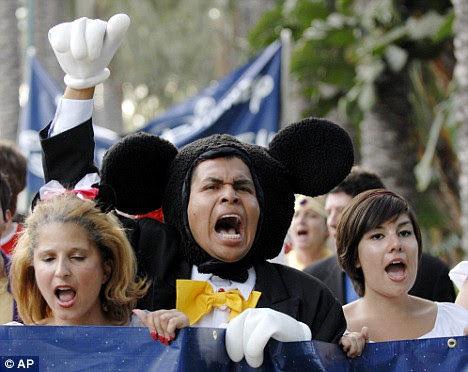 Those who were arrested sat in a circle on a busy intersection outside the park holding hands until they were placed in plastic handcuffs and led to two police vans while hundreds of hotel workers cheered and chanted. 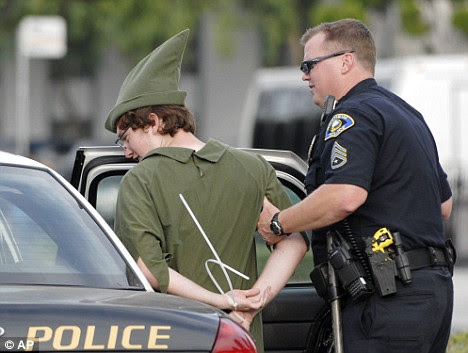 The protesters were arrested on a misdemeanor count of failure to obey a police officer and two traffic infractions, said Sgt. Rick Martinez of the Anaheim police. They were cited and released, Sgt. Chris Schneider said. 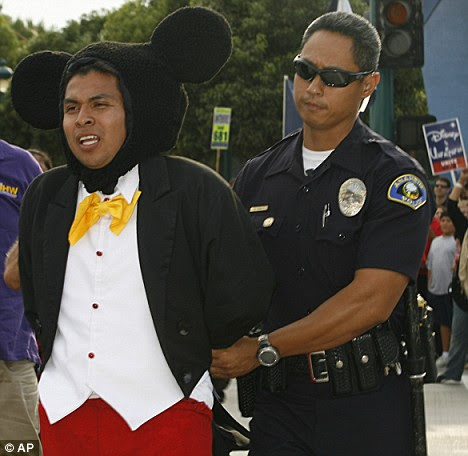 Before the arrests, the picketers marched and chanted outside Paradise Pier, holding signs that read, "Disney is unfaithful," and "Mickey, shame on you." They were joined by community activists and religious leaders from local churches.

Yes, it's funny, and I'm sure many are laughing at it: but there's a serious side, too.

Luz Vasquez, who works in the bakery at Disneyland Hotel, said she can't afford to lose many of her benefits. She said it's already hard to care for her three grandchildren and aging mother while earning $14.32 an hour.

"Disneyland is being unfair with us because we're fighting for our health care and they're trying to take it away," said Vasquez, 45. "They're trying to cut our hours and take away our seniority."

Co-worker Diane Dominguez, 50, said she was worried about losing health care because of the heavy labor involved in lifting mattresses, moving furniture and making dozens of beds a day. She also said rising prices and the cost of gas were eating into her salary of $11.11 an hour.

"The most important is health care. We need that and they want to take it away," she said.

At the heart of the issue is a free health care plan that has been provided to Disney hotel workers through a trust fund that Disney and other unionized hotels in the area pay into.

Briceno said that in exchange for the free medical plan, union members agreed in previous contracts to a lower wage for hotel workers in the first three years of their employment.

But Disney now wants to eliminate the free health plan for new hires and wants to create a new class of workers who put in less than 30 hours a week, said Briceno. Those part-time workers would receive no sick or vacation pay and not be given holidays, she said.

The company also wants to increase the number of hours full-time employees must work before qualifying for the health plan, she said.

"At the end of the day what it means is that workers are going to be priced out of health care," she said.

Considering the amount of money Disney's charging tourists to let them into its theme parks (an amount which I frankly regard as obscene), I tend to sympathize with the workers on this one!

I agree, the gate prices, and the prices for everything else there, are sickening. Screwing the people who work there to make another few cents per share this quarter is the American Way, and that won't change until people do.

And Brigid takes the prize for best comment yet on this blog!

Hard to see where eliminating the plan for new hires would affect the current workers who are protesting.

And it says nothing about eliminating the plan for part-time workers either, just getting rid of sick days, paid vacations and paid holidays.

And as far as talking about how it is tough to take care of three GRANDCHILDREN- where are the PARENTS?

I have (unwillingly) supported Disney to the tune of thousends of dollars. My wife and daughter have gone countless times to visit The Rat (and yes, Mickey is a Rat. Mice are small). Disney could raise the already obscene price of admission by a dollar or so to cover the rising costs and nobody would blink. They are greedy assholes. Maybe the negative publicity will make them rething the "screw our workers" plan.... probably not though.... They even got Hamas to comply with their wishes once..... (Hamas was using an unlicensed likeness of Mickey Rat)

Hell, we can't win with the terrorists, but Disney can??? The workers are screwed.....

To all who think the entrance fee is "obscene" have you priced the cost of a 2-3 hr ball game vs. all day at one of the theme parks?

Yes I am a (soon to be retired) "cast member" and that particular complaint has galled me for the last 22 years.

That is not to say I support what Disney is trying to do to those workers, because I don't, but please be fair about the entrance fees.
Dennis

MLB admission prices... could be a good ra.. post I mean, thanks for reminding me.