I'm thoroughly disgusted at the news of alleged 'artist' Paul McCarthy's exhibition at the Paul Klee Center in Switzerland - although I'm delighted that it's no longer on display, at least for now.

A giant inflatable dog turd by American artist Paul McCarthy blew away from an exhibition in the garden of a Swiss museum, bringing down a power line and breaking a greenhouse window before it landed again, the museum said Monday.

The art work, titled "Complex S(expletive..)", is the size of a house. The wind carried it 200 metres (yards) from the Paul Klee Centre in Berne before it fell back to Earth in the grounds of a children's home, said museum director Juri Steiner.

The inflatable turd broke the window at the children's home when it blew away on the night of July 31, Steiner said. The art work has a safety system which normally makes it deflate when there is a storm, but this did not work when it blew away.

Steiner said McCarthy had not yet been contacted and the museum was not sure if the piece would be put back on display.

My heartfelt sympathies for the children who had to put up with this landing nearby.

I've not been able to find any large pictures of this monstrosity, but here are a couple of small images I've been able to locate. 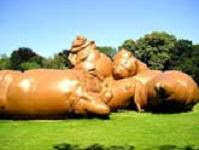 I did a little reading about Mr. Mccarthy (with negative consequences for my digestive system). I certainly don't recommend it - he seems a particularly unsavory character, with no redeeming features whatsoever that I can discern, judging by his alleged 'art' at any rate. He seems obsessed with sex and deviant behavior. To illustrate, another of his works is called 'Santa Claus With A Buttplug'. 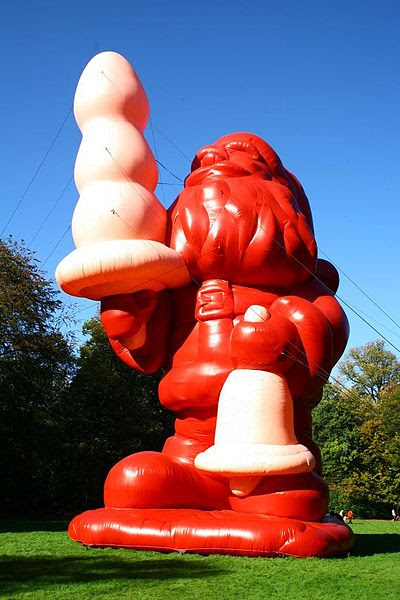 His work evolved from painting to transgressive performance art, psychosexual events intended to fly in the face of social convention, testing the emotional limits of both artist and viewer. An example of this is his 1976 piece Class Fool, where McCarthy threw himself around a ketchup spattered classroom at the University of California, San Diego until dazed and injured. He then vomited several times and inserted a Barbie doll into his rectum. The piece ended when the audience could no longer stand to watch his performance.

It's a good thing I wasn't there, or his performance would have ended when I handcuffed him and called for the wagon from the funny farm to put him in a padded cell!

An 'art forum' describes another of his exhibitions as follows:

Upon entering the exhibition a sign warns: "Viewer discretion advised. Some material in this exhibition may not be suitable for young viewers." Though the first sweeping impression of the museum and the exhibit seems innocent enough; large scale puppet figures abound, large dollhouse-like sets, scattered monitors projecting cartoon-like characters prancing around, and right in front, a life-sized sculpture group, Cultural Gothic (1992), of dressed suburban father and son, and a goat.

But after taking a closer look at Cultural Gothic, the innocent element dissipates along with your psychological bearings and comfortable viewing space. The Gap-clad boy is motorized and he is humping the goat. The cycle is simple. The boy and the goat look back to the father for approval, the father nods with his hands resting good-naturedly on the boy's shoulders, the boy begins gyrating, then the father nods his concluding approval.

And people dare call this 'art'? I think that anyone who can view such codswallop as 'art', or take it seriously, is in desperate need of psychiatric care - and probably mental detoxification as well!

Perhaps it's time for the Second Coming, when all this nonsense will be summarily cut off . . . either that, or a cleansing of the Augean Stables that modern art has become.

I'll volunteer to be chaplain for the clean-up detail - preferably the assault section!

We had a partial cleansing here in the UK some years ago when we had a fire in the Tate Modern. I recall at the time peoples initial reaction was, typically "A fire at the Tate? Oh no, that's dreadful.... What? the Tate Modern you say? Oh, what a relief, nothing serious then....."
The above quote overheard by myself at the information desk of our local museum....

Idiot exhibitionist children are one thing- the "art world" that encourages it is another. Ever actually try to read the "post-modern" crap that dribbles like vile pus from their mouths? It is worse than a Marxist on full rant mode.

Speaking of vile dribblings, I also the recall the piteous bleating which came from the "modern art" mob, which quickly turned to outrage when they realised that the public reaction was indifference, with shades of relief that it was only the "modern" gallery that had been incinerated.....