Two animal stories that made me blink


I read two animal stories this evening - both from England - that made me do a double-take.

The first is about a ball-chasing eagle. 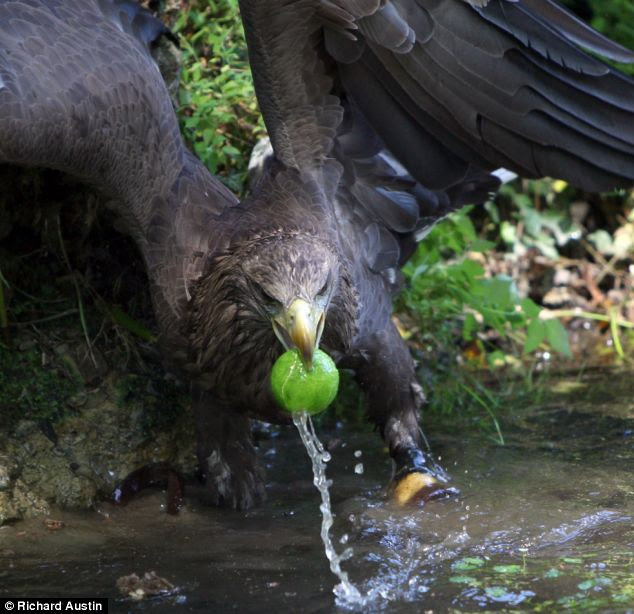 White-tailed eagles became extinct in Britain in the early 1900s, although after a re-introduction scheme there are now a few in Scotland.

Evie, however, was bred in captivity in Belgium and moved to Mr Hedges' Dartmoor-based falconry, Devon's Eagles, when she was two years old.

All the birds there – including owls, hawks and falcons – are exercised constantly. But Mr Hedges makes sure they also get some 'playtime'.

It was one day last month that Evie suddenly took flight, dropped over a mystery object and then returned with a tennis ball gripped in her beak.

'I couldn't believe it,' said Mr Hedges. 'I gave her some food and threw the ball and she chased it again.

'Then I wondered if I threw it in the pond whether she would fetch it and she did.

'Ever since it's been her ball. This is very, very unusual.'

Evie is now happy to fetch her ball – even catching it in midair – as long as Mr Hedges is happy to keep throwing it.

The thought of an eight-foot-wingspan eagle playing 'catch' with a tennis ball is just mind-boggling! I love it, though. Wonder how long the ball will last, with talons and a beak like that?

There are lots more pictures of Evie and her ball at the link above.

The second story is about the first Wagyu calves to be bred in Britain.

For most of us, an open-air concert in the rolling Cumbrian countryside would be something out of the ordinary.

But for these calves, it's just part of the daily routine.

Reared to provide the choicest steaks in the first Wagyu breeding programme in England, the ten-day-old Japanese cattle need to be kept in the best possible condition.

And, in keeping with tradition, this requires more than a field of grass and a bucket of water.

Instead, farmer Jonathan Denby has asked violinist Amy Worth, 32, to play to them, as music is thought to help the animals relax. He also feeds them on beer. 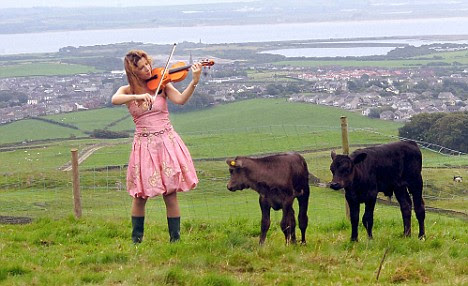 When live music is unavailable, a CD of Bach or Beethoven plays in their stalls.

The animals will also be massaged using special techniques, to make their meat more tender.

Wagyu or Kobe-style beef is known as the caviar of meat because it is so tender and succulent.

Selfridges sell imported Wagyu at £85 per steak sandwich. The meat can cost £230 per lb.

Mr Denby is breeding the calves to provide luxury steaks for his three hotel restaurants, priced at £15.

They're played live classical music? Fed on beer? Massaged? Say, how do I apply for one of those stalls?

(I'm safe from being converted into steak, you see - cannibalism is illegal!)

Even if it did end in my eventual consumption:

Beer, massage and a well fit bird serenading me in her petticoats...

I think that may lead to the first LOLEagle: "I WILL has fetch!"

Somewhere around here I've got a short clip (ok, an animated .gif) of an eagle attacking its dinner - a full grown goat. If you find these Hodgesaarrrgh related things interesting, be sure to drop by Steve Bodio's Querencia, as he's a falconer himself. The flying critters aren't quite as much my cup of tea as the swimming ones, but anything that good at on-the-fly (pardon the pun) differential calculus is amazing, even if there isn't much room left in the ol' noggin for anything else.

As for the beef, I love nothing more than cowflesh, but I know for a fact I will never cook kobe or waygu beef. The pressure not to screw up such meat would give me stage fright on the order of telling Little Billy that his piano recital will be held at Carnegie Hall. I would immensely love to try eating some, but at those prices, I think I'll just put in for more hunting and get some nice venison or elk.