I hadn't thought about this before, but apparently paperweights can be hazardous to your health!

It is not what most would consider a dangerous hobby.

But a glass paperweight nearly cost one collector his life after it caught the sun's rays and set his home on fire.

Matthew Williams, who has collected paperweights for seven years, woke to find his flat burning around him. 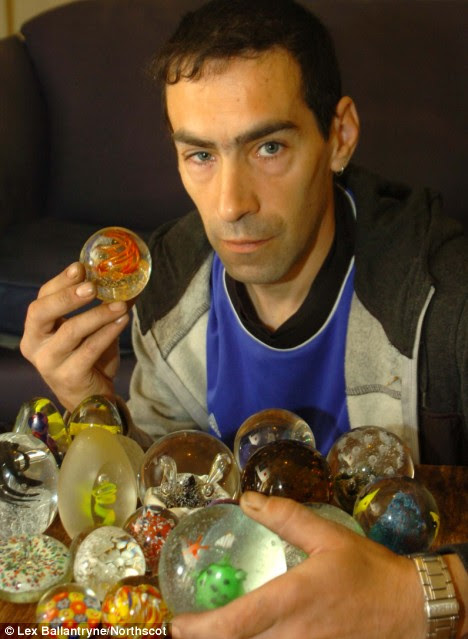 The 38-year-old from Elgin, Moray, Scotland, said he believes the blaze was caused by one of three paperweights he had placed on his bedroom windowsill.

Mr Williams had bought the ornaments from a charity shop for £9.99.

He said: 'If I hadn't woke up when I did, the fire would have spread and I would have died. I would never have got past the fire.

'I used to have my paperweights sitting on the windowsill and dotted around the house but they're packed away now. I'm not taking any risks with them.

'They acted like a magnifying glass and projected the sun's rays on to a plastic bag, which then caught fire. It's unbelievable.

I've used a magnifying glass to set fire to paper and leaves, but I wouldn't have thought a glass paperweight could serve the same purpose.

There's a short video on YouTube showing the effects of sunlight, focused through a paperweight, on wood.

I am glad I do not collect paper weights.

There was one guy who caught his car on fire because of the crystal pendant dangling from his rearview mirror. Yow!