So much for the Olympics!


It seems that the zanier and wackier members of the human race don't let a little formality like the Olympic Games slow down their pursuit of insanity.

From Finland comes the news of a whole raft of "world championships" in sports such as wife-carrying; mobile phone throwing; air guitar; "Rautalanka" guitar playing (a style native to Finland, I understand, and also known as "twangy guitar"); swamp soccer; berry picking; and snowshoe football (for which snow is apparently an optional accessory). There's even the intriguing (?) sport of sitting on an ant's nest. Apparently by allowing 40,000 ants to crawl all over their derrières, competitors are "following an ancient health ritual -- one which keeps all their senses alive". I'll take their word for it!

Every summer, Finland stages literally hundreds of little-known (or not-known-at-all) "world championships" in such sports. People flock there from all over Europe to participate, and everyone seems to have a great time.

US readers may preen at the news that an American won this year's Air Guitar championship.

Craig "Hot Lixx Hulahan" Billmeier (US) crushed the opponents with his polished performance at the Air Guitar World Championships Grand Final on Friday 22 August in Oulu, Finland. The two-year-reigning Air Guitar, Ochi "Dainoji" Yosuke (JP), had to give in to the overwhelming new Champion. Hot Lixx Hulahan scored highest on the First Round, and on the Second Round defeated his strongest opponent, Andel "John Sniffler" Soreen (NL), with his impeccable timing and an overall solid performance that took the audience by storm.

Congratulations to "Hot Lixx Hulahan" . . . I think! You can see him in action in the clip below.

Swamp soccer seems to be a cross between the sublime and the ridiculous, as these pictures show. 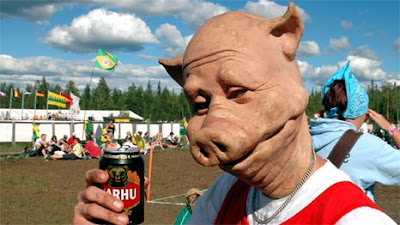 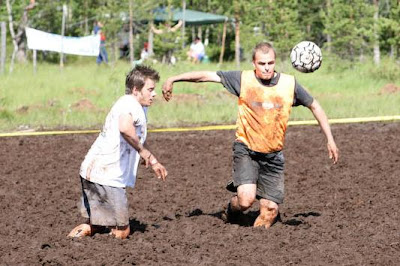 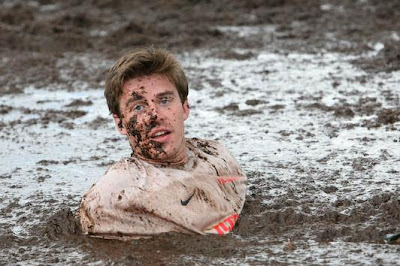 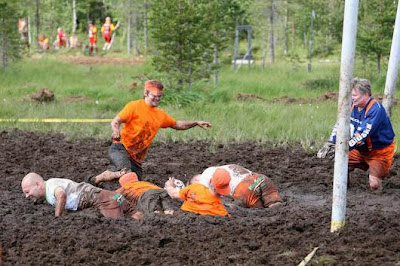 Snowshoe soccer, on the other hand, is cleaner, but considerably more difficult, I'd say. I note that each player must have personal accident and liability insurance!

The warm weather caused the lack of snow on the playfields. Fridays fields were almost swimable, but the Saturdays finals could be played on some firmer liquids, on a blend of ice, snow and water.

The lacking snow and the players fighting spirit gave also the snowshoes hard time. Compared with last years games, a record amount of snowshoes were broken this year giving the shoemakers a lot of work.

"Next year we must create our own snowshoes specially meant for the Snowshoe Football, so we can play without unnecessary breaks and without broken gear", said the games administration. 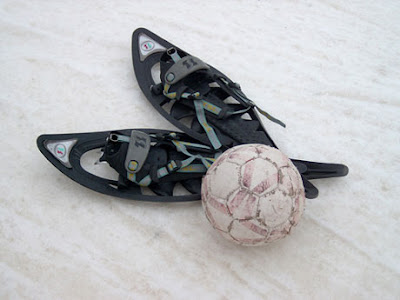 Finland may be the world's leading oddball World Championship event provider, but that doesn't mean other countries are left out. Yesterday, for example, Wales hosted the 2008 World Bog Snorkeling Championship.

The Olympics may be over, but that doesn't mean that the world is suddenly deprived of dedicated athletes competing at the very peak of their performance. Witness, for example, the 170 people who turned out for the World Bog Snorkelling Championships on Monday.

This year a record number of entrants donned a snorkel, flippers, and in many cases fancy dress, to cover 120 yards in a peat bog in Llanwrtyd Wells, Powys, Mid Wales. 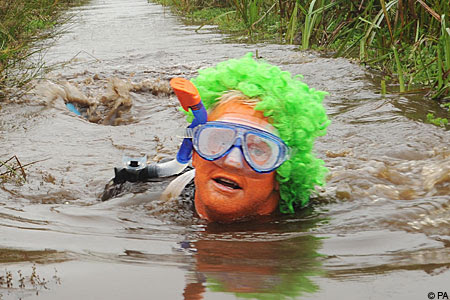 Just to make it that bit harder, they weren't allowed to swim using conventional strokes, with officials insisting they doggy paddle or hold their arms out in front of them.

Despite the rain, which turned the car park into something resembling a bog itself, hundreds of people turned out to witness the eccentric spectacle.

Organiser Sheelagh Tompkins said: 'This is one of those wacky events you've got to do once in your life.

'I think people have been inspired by the Olympics. There are lots of serious competitors, and many of them come back year after year.

'It's been wonderful, and some of the costumes have been unbelievable. Everyone has had a fantastic time.' 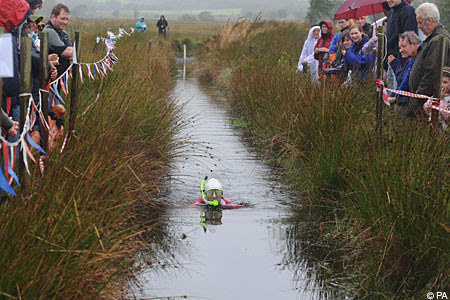 Competitors came to the event from as far afield as Australia. Some took part in their pyjamas, some in camouflage - and one man even had an ironing board and iron strapped to his back.

In a British sporting triumph that surely ranks alongside the heroics of Chris Hoy and rebecca Adlington, the winner of this year's event was 23-year-old Conor Murphy, from Portadown, Northern Ireland.

Mr Murphy, who now lives in Leicester, completed the two lengths of the 60-yard course in one minute, 38.9 seconds.

The world record time, in case you're thinking of giving it a go yourself, currently stands at one minute 35 seconds.

I'd like to have seen one of our Olympic champions strap an ironing board and iron to himself while participating in Beijing! I wonder what the Chinese authorities would have made of it?

Thank God for the zanier aspects of the human spirit. A good chuckle now and then prevents us from taking ourselves too seriously!