Things may be improving slightly for those of us in North-Central Louisiana - but that makes it much worse for those in South-West Louisiana and East Texas, I'm afraid.

Gustav's predicted track has swung slightly West, putting its eye about 70-80 miles from my home at its closest point, instead of the 50-odd miles forecast this morning. That's excellent from my point of view, because the wind strength in my area will be that much lower. We're certainly going to get tropical-storm-force winds, but perhaps we'll be spared the real killer blow we were fearing. Click the chart for a larger view.

Gustav has also speeded up significantly, which is good news. It'll arrive almost a day sooner than first expected: and because it's moving faster, it'll have less time to pick up strength from the warm waters of the Gulf of Mexico. It's now expected to hit land as a Category 3, rather than the Category 5 monster we were expecting. That's a huge, huge relief, particularly for New Orleans, which is going to catch the brunt of the storm surge from the North-East quadrant of Gustav as it approaches. Still, a Category 3 hurricane is nothing to sneeze at. Katrina was a Category 3, remember, and look what she managed to do! The first bands of Gustav's rain are already visible on New Orleans radar. 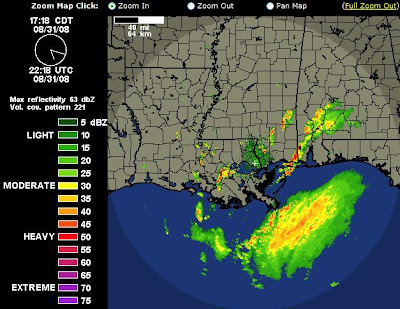 A friend of mine in the Louisiana State Police is tearing his hair out over the antics of some of our Southern Louisiana Cajun Redneck types. Apparently he and his officers have stopped literally dozens of motorists towing FEMA travel trailers - wait for it - without any towing ball or proper towing apparatus at all! They've simply tied or chained them to their rear bumpers, and are heading North with the family in the back of the pickup (and sometimes, illegally of course, in the trailer itself!). He says that there are a couple of back roads far to the South littered with the shattered remains of such trailers, that came loose within the first few miles of their owners' journeys. His comments on the intelligence, evolution and Darwinian self-selection aptitude of the drivers concerned are, unfortunately, not really the sort of thing I can reproduce here. The price of fireproof monitors would make reading them cost-prohibitive . . .

Anyway, we expect the main force of Gustav to make itself felt along the coast in the small hours of tomorrow morning. The eye should come ashore around noon tomorrow. If Gustav keeps up his present rate of speed, by then I'll be very, very wet up here! I'll try to live-blog events tomorrow morning as they develop, but I'm afraid we're sure to lose power in due course. I'll narrate events as long as I can, then you'll have to find a more weatherproof blogger to take up the baton.

Glad to hear time has improved your outlook.

I am gald to hear things are getting some what better for you.

glad to hear that it's moving away ... let's hope it keeps going :)