According to the latest prediction, Gustav's track has shifted very slightly to the East, so the eye won't be a direct hit on my home: but I'll be within 50 miles of it - right in the bad North-East quadrant, where the strongest winds and rain are expected. The map below shows the currently forecast track as a red line. My home is marked with the letter "A" in the red icon. Click the map for a larger view. 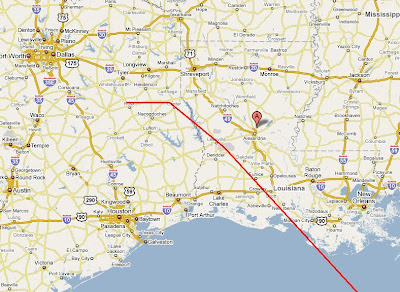 I won't be evacuating. Due to my work with the relief teams, we hadn't considered evacuation, and at the time our area was designated an evacuation zone for refugees from further south. It's now been re-designated as an impact zone: but by now every hotel room and shelter North of here, as far out as Little Rock in Arkansas or Memphis in Tennessee, is full to the brim. I guess I'll be riding this one out.

Two problems have emerged. First, I can't put plywood over my windows. I bought some in preparation, and tried to mount it this morning: but the aluminum siding on my house won't take the weight, and the window-frames protrude from the siding, so that the wood can't be seated tightly against the house. I guess my windows will have to take their chances.

The other problem is the trees around my house. I have about six large trees which, if they let go in the high winds that are forecast, may fall on my home. (We have a 70%+ chance of tropical storm force winds, a 50%+ chance of winds over 50 mph, and a 30%+ chance of full-blown hurricane-force winds, according to the latest NOAA forecast.) There's not much I can do about that at this time, except pray hard! I'll have to ask my Guardian Angel to put on his catcher's mitt for the duration, I guess! I'll also move to a central location in my home, away from the nearest trees.

I suppose it's for the best that I stay put. I'll be on site to help co-ordinate our relief efforts as fast as possible after things blow over. I'll try to keep this blog updated, but it's a virtual certainty that we'll lose power at some stage, and probably not get it back for several days. I plan to live-blog the storm as it develops, so watch this blog from Monday afternoon for regular updates. If the updates stop coming without an explanation, it'll probably be because our power's gone out, or the telephone lines are down.

I'll try to let some friends know if I'm OK after the storm. If this blog isn't updated for a few days, check out Lawdog, JPG, Holly or Phlegm for news about me. I'll try to get messages to them somehow.

Labels: Hurricanes, Me me me, Preparations
Email ThisBlogThis!Share to TwitterShare to FacebookShare to Pinterest

Keep your head down, and your guard up! Silly though, perhaps, but: could you put that plywood on the INSIDE of the windows? That wouldn't protect them from getting broken, of course, but it might protect YOU from flying glass!

Good luck and best wishes from a regular reader!

Goodluck riding out the storm at home. I'm on company business in College Station TX, and it's the first time I've ever been near the approach of a hurricane.

If you need anything after it's all said and done, let me know. I'll do whatever I can to help, as I have enjoyed your blog in the extreme.

Take care, my friend, my prayers are with you.

You might want to consider some duct tape on the windows to help reinforce the windows and capture glass fragments in the event of breakage. It's a pain to remove, but, if you get to that point, it means the windows are intact. :)

We'll be thinking of you and praying for you in the coming hours.