An interesting vehicle - but why???


I'm amused by a report in the Daily Mail.

An automotive mechanic has driven into the record books - by building the world's lowest van. 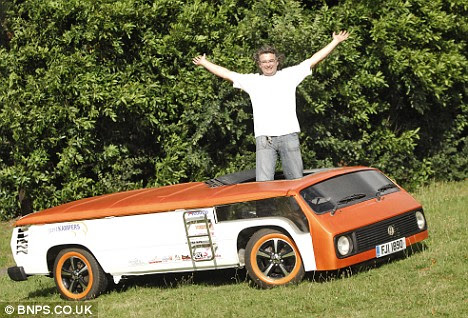 The 1980 Type 25 camper had 70,000 miles on the clock when Saunders and three friends transformed it.

The steering had to be lowered and moved to a central position and all the systems altered to make it work.

There are two seats behind the driving position, it is fully road worthy and Saunders believes it could get into car parks by driving under the barrier.

Although it is possible to sleep in the back, the height of the roof could cause claustrophobia.

With a top speed of 80mph the bizarre camper turns heads when Saunders drives it around his home town of Poole in Dorset. 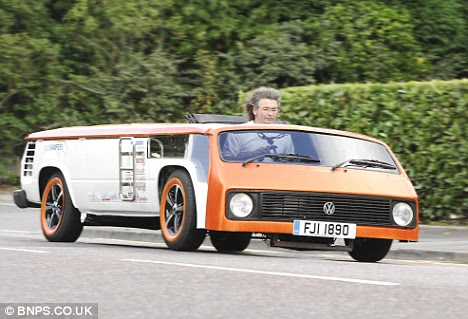 Saunders, 45, who bought the van for £1,000, said: "The challenge was to build the world's lowest van in just three days.

"We did it in front of an audience at the Bug Jam VW festival in Northamptonshire.

"We were up at 6am and worked for three full days - it was the hardest thing I've ever done.

"The biggest problem was the roof because when we cut a big chunk out there was a 14ins difference because of the tapering.

"Then we had to move the steering into a central position and put in a new steering system.

"We lowered the seat, moved the handbrake and the gear stick and replaced the fuel tank.

"It is roadworthy, does about 80mph and you could throw mattress in the back and sleep in it.

"We've applied to the Guinness Book of Records and they've indicated this is the world's lowest van."

Oh, well. It seems rather pointless, but I suppose it was fun!

Labels: Automotive, Boys and their toys, Funny
Email ThisBlogThis!Share to TwitterShare to FacebookShare to Pinterest

Guinness has inspired all sorts of pointless activity with their record book.

Kind of sad that this is the hardest thing he has ever done.

I like his keeping a shortened ladder on the side.