I've been alerted to an interesting blog by an e-mail from Mike P.

The author describes himself as:

An Assistant Professor at West Point's Department of Social Science (Sosh-P), currently leading a group of eight cadets on a trip to Dharamsala, India.

That's an interesting mixture for a start! He writes about the towns, people and places he encounters in a very engaging way. Here's a snippet to whet your appetite.

I've been amazed at the amount of tragedy that covers the front page every day. In the 10 days since I arrived here, India has seen the worst terrorist bombings in years, border clashes in Kashmir, rioters slain in Jammu and the closing of 'half-truth' television stations, over 20 dead in a train fire and most recently 150 dead in a temple stampede 'near' us...about 70 miles away but over a three hour taxi ride. Where similar events would each dominate the news for weeks back home, here it seems the bodies are barely cold before a new tragedy takes over the news cycle.

Again, I am using this as a teaching point for the guys. Much like in Iraq, a tragedy even 100 miles away seems like 1000. Life simply and quickly moves on here. Maybe this reflects a society where fatalism and reincarnation pervade personal belief.

In this largely dry nation, my tonic here has largely been massage. I've had three so far with more on the way. A maybe once a year treat at home, with these ranging between $7 and $12, I know that every day I don't get one will be a day I regret at home. So I've had quiet, incense filled room Swedish ones, a Shiatsu that almost made me pass out with the pain, and an ayurvedic that began with pouring hot oil on my head that was actually the best. After my lead, most of the guys have followed suit, with many getting their first. They've made me laugh with talk of 'near second-base'.

Yesterday, two cadets and another volunteer decided it was time to get away from the people and see a bit of the Himalayas. For almost all of our time here, our field of vision has been restricted to the foothills around Dharamsala, with the huge mountains behind shrouded in clouds. We chose a well trod hike into the Himalayas. Along the soaked route, where the trail became the path of least resistance for the torrents rolling onto and down the mountains, small wooden and stone tea shacks provided a chance for us and my dogs to huddle and take a break from the pelting rain. I miss my dog so I've gotten into the bad habit of patting the wet, ratty, rangy and sometimes visibly diseased strays on the head. In turn I receive their loyalty and escort. Joining us in these cramped smokey huts, we found a family of four going up over a pass towards their home town. The mom slung her baby, Krish onto her back like a backpack...I had to keep up a good pace not to be passed by her. We passed another young woman hauling a three foot diameter bundle of grasses. We swapped cookies for photos. 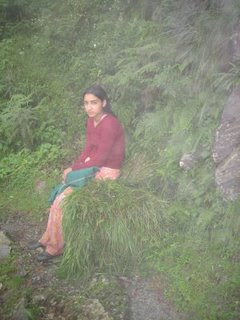 Three hours and 3,500 feet up from McLeod we reached Triund, a saddle that was supposed to give a sweeping vista of the Himalayas. Instead, all we saw was pure gray as we all discovered that the shroud would not lift through sheer will power, karmic beliefs, etc. As we huddled in a small stone shack, warming up by drinking chai and eating a bowl of Indian ramen, two South Koreans, soaked in their shorts, t-shirts and flip flops, shared the hut with us and an upper class Indian family of two college aged boys and their mom who all now live in San Diego. The youngest one sported a Metallica t-shirt so we debated when they went commercial. Our conversation was interrupted by a spectacular ligtening bolt strike about 100 meters away, beneath me. Time to get off the mountain; we finished our ramen and headed out, the dogs and their loyalty left behind.

Almost as soon as we started, the rain began to weaken and the clouds started to reveal the vista of the valley below. Behind us the Himalayas came into focus, enormous, reminiscent of the treeless Rockies. We passed umbrella totting Buddhist monks, out for a stroll, another reminder that we aren't that tough. I felt good, worn and relaxed at the end, but I still think I'll take a massage just to be safe...

I'm not sure if the blog will continue after their visit is concluded, so I won't add Sosh P. to my blogroll as yet: but if he does carry on blogging, this one will be a permanent bookmark, I think.