Well, the big day has come and gone, and the so-called 'Rapture' predicted by Harold Camping and his Family Radio ministry has failed to occur on schedule (well, his schedule, at any rate).

I'm hardly surprised, of course. Despite Mr. Camping's claim that the date of the 'Rapture' could be known with certainty from Scripture, he contradicted Christ by making that claim. Jesus said of His return, in Matthew 24:36-44;

By predicting the date of Christ's return, Mr. Camping was denying the words of Christ Himself. No Christian worthy of the name would so flagrantly contradict the Biblical message. Mr. Camping may be quite sincere in his own mind, but by his own words and actions, he's identified himself as one of the 'false prophets' of whom Christ warned us (Matthew 24:24-27).

You wouldn't know that from Family Radio's Web site. At 8.30 this evening (Central time), it was still displaying this: 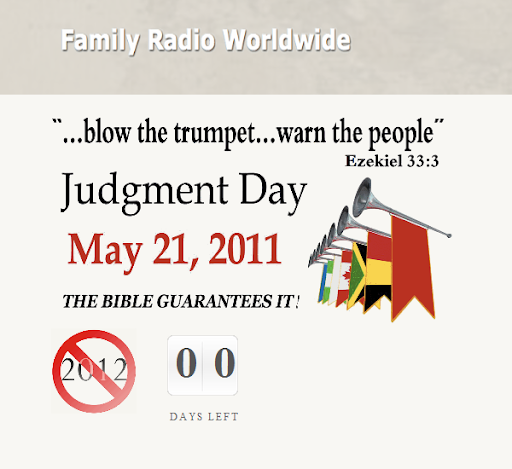 Guess they must be hoping that the Rapture's merely running a little late, huh?

Fellow blogger Skippy (whom we've met in these pages before) had a lot of fun with this week's Rapture predictions. First, he came up with a magnificent conversation between a minion of Satan, and someone who's been 'left behind' by the Rapture. Here's an excerpt.

Well that is a valid question sir. After all, given that the rapture occurred a little under twenty-four hours ago it would stand to reason that a fine upstanding gentleman such as yourself, not to mention your lovely family, should have been whisked away to paradise. Unless, and I hesitate to put it this way sir please do not think of me as rude, but unless, well, you haven’t been quite as virtuous as you would like to have believed.

I know sir, and I apologize. I assure you, I am not judging you, the Bible has made it quite clear that is not my prerogative. There is but one judge, and well . . . it seems he has rendered a verdict.

I don’t mind the question at all sir. In fact i am glad that you asked. I know all of this because I am a representative of the local Satanic commune. Yes sir. Yep, you guys were right in the eighties after all. We were hiding out in every town in America. Any-hoo, I’ve been assigned to your family for the Tribulation. You know the period of strife, terror and pain following the Rapture. I just figured it would be polite to introduce myself and see if there was any way that I could ensure that you have the best Tribulation experience possible. So are there any cherished family pets that would render you horrified to see dismembered? Perhaps you have a phobia? Ideally for a locust with the face of a man and a scorpion’s tail because between you and me, we have more of those than we know what to do with.

Then, a day later, Skippy designed and published this delivery label (click it for a larger view): 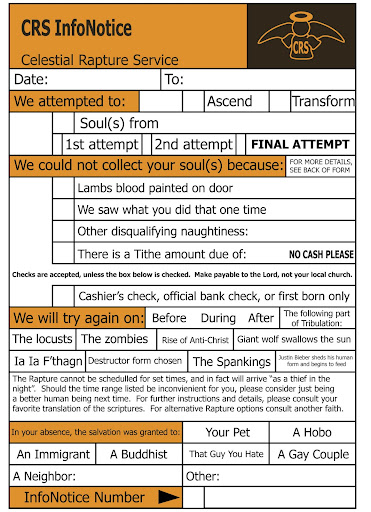 Beautiful! Both entries (and others at his blog this week) had me howling with laughter. That's perhaps the best antidote to false prophets and ruptured Raptures.

Quite a few Christians deny the words of Christ. His words don't seem to mesh with their doctrines.

**The delivery label was hysterical!

Bob Newhart could have driven that one clean out of the park, he is superb at doing a monologue where he does one half of a conversation.