Via Dustbury, we learn of Toyota's plans to make its next generation of hybrid vehicles more useful in disaster situations. From the first link:

The March 11 earthquake and tsunami will get Toyota customers a unique feature: A genset, free with purchase of a hybrid. Toyota was moved by the fact that people who had not electricity, but who had gasoline, rigged their hybrid to produce at least a little power. Akio Toyoda announced that “all Toyota hybrids will receive a new function that allows them to be used as emergency generators.”

From the second link:

At the April 22 press conference in Tokyo, where Akio Toyoda laid out the plans of how Toyota will get back to a normal production schedule by the end of the year, Toyoda said that he had been "very moved" when he heard that people in the stricken areas had used the batteries of their Estima hybrid minivan as a power source for cell phones and laptops when the regular power was out. 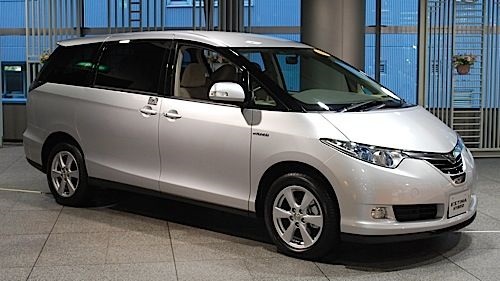 It would be no great engineering feat to build a bidirectional charger that allows the car battery to provide back-up power to the house, and that turns a hybrid into a genset. With a solar array on the roof of the house, the most expensive part of a solar system, the battery and the back-up generator, would already sit in the garage.

Kudos to Mr. Toyoda for thinking of this. It'll make hybrid vehicles that much more practically useful - certainly more so than conventional vehicles, in disaster situations. I like it when manufacturers think outside the box like this. If they get it right, we win.

(And, in a disaster, even if you've been de-prived of power, you won't have been de-Priused!)

Another option would be to own a 12v to 110v transformer that plugs into the cigarette lighter. It provides enough power to charge small appliances like a laptop or cell phone.

Daddybear:
A small inverter is another option, but you run the risk of running your car battery flat and then being unable to start it. The hybrids (I think) start their little engines automatically to recharge.