Today's winner is from China.

One moment he thought he was just an anonymous punter in a backstreet brothel.

The next he's in the nude hanging off a drainpipe after police burst into the brothel he was using in eastern China. 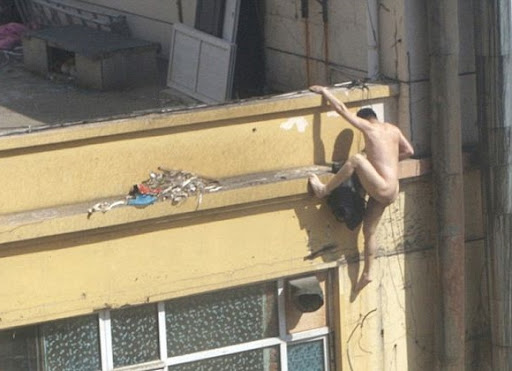 As the doors were smashed down the customer, leaving his clothes behind, ran on to the roof of the rundown apartment bloc in Changchun, Jilin province.

He then shinned down what appears to be a huge drainpipe and then ran off into the backstreets.

I daresay locals now know this gentleman by rather more than the cut of his cloth!

Most of the time we just laugh about it, but this time, we actually got the real skinny. Can you imagine how embarrassed this guy must have been? In the wrong place, at the wrong time. Wow! That's like being photographed at the ballgame with your girlfriend; the wife is at the pizza parlor with the kiddies, one eye on the ball game, and oops .... :)