Do your ears deceive me?


As far as relationships are concerned, I think this new product might just add a whole new dimension!

Some people spend their lives wearing their hearts on their sleeves. 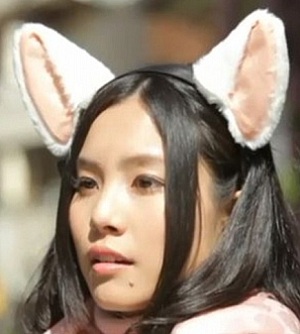 Thanks to a Japanese company, you can show off exhibit your innermost feelings somewhere else - a pair of fluffy ears on your head.

Electronics firm Neurowear has created a set of ears that apparently respond to the wearer’s emotions via a sensor on the forehead.

When the user is sad the ears flop down, if they are concentrating they stand up, wiggle around if the wearer is amused and go flat if they are tired.

Neurowear claims that there is a direct link between what the person is thinking and what the Neocomimi ears do.

The Neocomimi works with a headband that goes round the user’s forehead and monitors brain waves.

A small computer then supposedly works out what kind of mood the person is in and changes the angle of the ears with a small motor.

The ears brought a slew of comments from users including one man who claimed cheekily that: ‘Men have built-in neurowear.’

A female poster replied on the same blog: ‘So do women. You just can’t see ours.'

There's more at the link. Here's a video clip demonstrating the Neocomimi ears in operation.

I can see kids enjoying them, but as far as adults are concerned, I guess their main market will be at Furry conventions!

Or movable ears and horns, like a faun. That could be fun...

And here I thought the wearable hummingbird feeder was the latest in "you've got to be joking" consumer products . . . I sit corrected.
LittleRed1

Hunh... you know, I think I like that idea. Don't want them, but it looks fun!

I am so loving the 21st century so far. Godawful wars taken aside, it's just so darn playful in the West.

...My inner seven-year-old just screamed at a pitch that could break glass.