The 2011 World Beard & Moustache Championship has just been held. The BBC reports:

A German hairdresser has won the title of world's best beard at the World Beard and Moustache Championship in Trondheim, Norway.

Elmar Weisser, 47, beat 160 contestants to the prize with his elaborate facial hair sculpture of a moose. 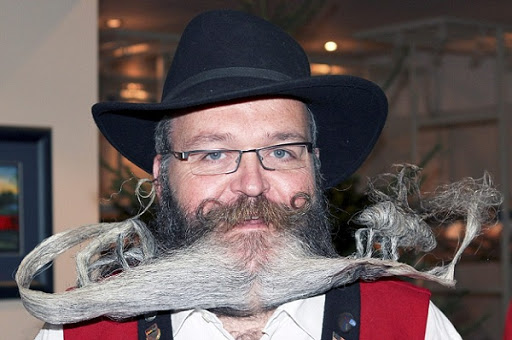 It is the third time Mr Weisser has emerged as champion.

The World Beard and Moustache Championship has been running every two years since 1995 and its organisers say it is "the premier event in the international sport of bearding".

Contestants from all over the world compete in 14 categories, including natural goatee, sideburns freestyle, Hungarian moustache and imperial partial beard.

Organisers say the field has traditionally been dominated by Europeans but that the US, which has twice hosted the event, is fast becoming "the world's new facial hair super power".

There's more at the link. More pictures of the finalists may be seen here.