In Memoriam: The Martyrs of Tibhirene


On the night of March 26th/27th, 1996, seven Trappist monks from the Monastery of Our Lady of Atlas in Tibhirene, Algeria, were kidnapped by Muslim fundamentalist terrorists from the Armed Islamic Group of Algeria (GIA). Their captors demanded the release of Abdelhak Layada, one of their leaders who'd been imprisoned by the Algerian authorities, in exchange for their seven hostages.

On May 21st, 1996, fifteen years ago today, after negotiations appear to have been either mishandled or broken down in some way (accounts differ), the GIA claims it beheaded the seven monks. Their heads were discovered on May 31st. After a solemn funeral Mass on June 2nd, their heads were buried at the Monastery in Tibhirene on June 4th. Their bodies were never found.

The dead monks (all French) were Dom Christian de Chergé, Brother Luc Dochier, Father Christophe Lebreton, Brother Michel Fleury, Father Bruno Lemarchand, Father Célestin Ringeard, and Brother Paul Favre-Miville. All seven are regarded as martyrs by many of the faithful, although their deaths have not as yet been definitively pronounced to be martyrdom by the Church. (Their cause is pending in Rome.)

Pope John Paul II sent a message to be read at a memorial Mass for the seven victims in October 1996. It read in part:

The witness of the Trappists of Our Lady of Atlas takes its place alongside that of the Bishop of Oran, His Excellency Pierre Lucien Claverie, and of not a few other sons and daughters on the African continent who, during this period, have given their lives for the Lord and for their brothers and sisters, beginning with those who persecuted and killed them. Their witness is the victory of the Cross, the victory of the merciful love of God, who saves the world. The Testament that Dom Christian de Chergé left behind offered to all the key for understanding the tragic occurrence in which he and his confreres were involved, the final meaning of which is the gift of life in Christ. "My life," he wrote, "was given to God and to this country."

Dom Christian seems to have had a foreboding that he might one day die in this fashion. A few years before his kidnapping, he wrote a farewell testament - a contemplation, if you will - which was released after his death. It's a remarkable witness to the quality of his soul, and - to me at least - is the ultimate answer to all those who try to paint every Muslim as a terrorist, and the whole of Islam as some sort of satanic anti-Christian cult. Both are lies . . . but I'll let Dom Christian demonstrate that from beyond the grave.

If it should happen one day - and it could be today - that I become a victim of the terrorism which now seems ready to engulf all the foreigners living in Algeria, I would like my community, my Church, my family, to remember that my life was given to God and to this country.

I ask them to accept that the Sole Master of all life was not a stranger to this brutal departure.

I ask them to pray for me - for how could I be found worthy of such an offering?

I ask them to be able to link this death with the many other deaths which were just as violent, but forgotten through indifference and anonymity.

My life has no more value than any other.

Nor any less value.

In any case it has not the innocence of childhood.

I have lived long enough to know that I am an accomplice in the evil which seems, alas, to prevail in the world, even in that which would strike me blindly.

I should like, when the time comes, to have the moment of lucidity which would allow me to beg forgiveness of God and of my fellow human beings, and at the same time to forgive with all my heart the one who would strike me down.

I could not desire such a death.

It seems to me important to state this.

I do not see, in fact, how I could rejoice if the people I love were to be accused indiscriminately of my murder.

To owe it to an Algerian, whoever he may be, would be too high a price to pay for what will, perhaps, be called, the "grace of martyrdom," especially if he says he is acting in fidelity to what he believes to be Islam.

I am aware of the scorn which can be heaped on Algerians indiscriminately.

I am also aware of the caricatures of Islam which a certain islamism encourages.

It is too easy to salve one's conscience by identifying this religious way with the fundamentalist ideologies of the extremists.

For me, Algeria and Islam are something different: they are a body and a soul.

I have proclaimed this often enough, I believe, in the sure knowledge of what I have received from it, finding there so often that true strand of the Gospel, learnt at my mother's knee, my very first Church, already in Algeria itself, in the respect of believing Muslims.

My death, clearly, will appear to justify those who hastily judged me naive, or idealistic:

"Let him tell us now what he thinks of it!"

But these people must realise that my avid curiosity will then be satisfied.

This is what I shall be able to do, if God wills - immerse my gaze in that of the Father, and contemplate with him his children of Islam just as he sees them, all shining with the glory of Christ, the fruit of His Passion, and filled with the Gift of the Spirit, whose secret joy will always be to establish communion and to refashion the likeness, playfully delighting in the differences.

For this life lost, totally mine and totally theirs, I thank God who seems to have willed it entirely for the sake of that joy in everything and in spite of everything.

In this thank you, which sums up my whole life to this moment, I certainly include you, friends of yesterday and today, and you, my friends of this place, along with my mother and father, my sisters and brothers and their families, the hundredfold granted as was promised!

And also you, the friend of my final moment, who would not be aware of what you were doing.

Yes, I also say this Thank You and this A-Dieu to you, in whom I see the face of God.

And may we find each other, happy good thieves, in Paradise, if it pleases God, the Father of us both.

Last year a film about the seven martyrs of Tibhirene, 'Des Hommes Et Des Dieux' ('Of Gods And Men'), was introduced at the Cannes Film Festival. 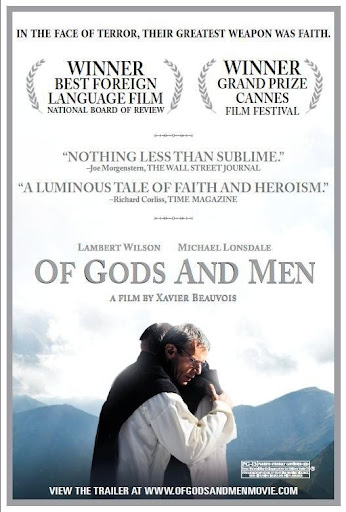 It took the prestigious Grand Prix award, and has received many other honors. It was released in the USA this year.

Here's the trailer for the movie.

If you haven't yet watched it, may I suggest it deserves a place on your home TV screen? Soon? And if you're one of those who condemns all Muslims for the terrorism of a few, you might learn something important by watching it.

Stunning. I'm looking for this and checking the Vatican website for further information about these courageous men.