Someone must have been very piss-suasive!


I'm a bit mind-boggled at a new solution to an old problem, devised by our neighbors to the north. The Canadian National Post reports:

Canada’s battle against public urination has a monument, and it stands in Victoria, B.C.

Prominently located just across the street from one of the city’s premier theatre venues stands the first of many artisanal urinals designed to rid Victoria’s alleys and alcoves of the unwanted stench of urine.

The $60,000 facility isn’t so much a bathroom appliance as a piece of public art. An automatic-flush stainless steel receptacle surrounded by a swirl of light-green tubes, it’s "an attraction in itself", says Bruce Carter, CEO of the Greater Victoria Chamber of Commerce. Designers proudly note that it is the first municipally sanctioned open-air urinal in North America. 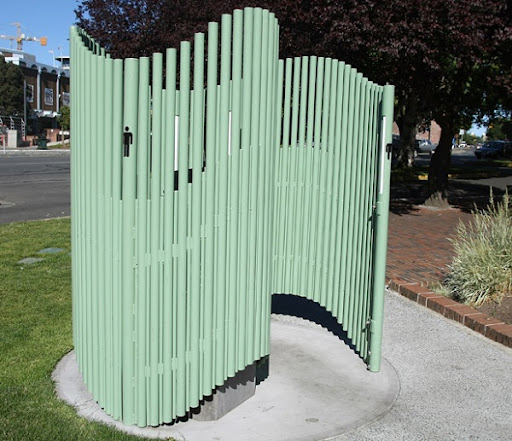 After a call for proposals, the city chose Matthew Soules Architects, a hip Vancouver firm with a resume focused more on office interiors and art centres. "When you got to architecture school, your dream would never be to design a urinal," says owner Matthew Soules. However, the firm relished being at the vanguard of a new North American trend.

No design consideration was too minute for the Victoria urinal. Mr. Soule’s team crafted detailed computer models to calculate whether residents in nearby buildings would be able to peer into the structure. They experimented with different spacings between pipes to allow just the right amount of privacy while still leaving it open enough to avoid becoming a shelter for illicit activities.

Colour alone took up dozens of emails between the design team and city officials. "We honed on in this iteration of green as being something that resonates with the natural environment, yet embraces the fact that it’s an artificial thing," says Mr. Soules.

It’s a male-only device device, of course (males are "95% of the problem", explained Victoria Mayor Dean Fortin at the urinal’s official ribbon cutting) but the urinal is equipped with handles and a lower-than-average receptacle to give adventurous women a chance at emergency relief.

Other cities have shown tentative interest in Victoria’s strategy. Last October, at their annual conference in Fort Worth, Texas, the International Downtown Association even gave it their Downtown Pinnacle Award.

This brings up all sorts of thoughts.

Finally, someone has to ask . . . does one refer to the location of this thing as a 'urinary tract' of land?