Two days ago I wrote about Northrop Grumman's new optionally piloted UAV, the Firebird. Additional details are coming to light, making this project even more interesting to aviation and military enthusiasts.

Bill Sweetman considers the Firebird in an Ares report. Some of his conclusions are the same as mine, but he adds others.

The biggest advantage of the new design could be easier integration of payloads. Firebird has a payload architecture designed for "plug and play", with a payload bay located on the center of gravity, making it less sensitive to payload mass.

Combined with the piloted option (which vastly simplifies testing and demonstration in the US, by avoiding airspace restrictions and cumbersome regulations) this could make a huge difference to the money and time required to get new sensors off the test bench and into combat. And considering that payloads for UAVs develop on information-systems timelines, while aircraft and engines evolve over decades, that's important.

The 1,240-pound payload is not as large as Reaper's or Eitan's -- but many payloads are getting smaller, and while Firebird has a pair of hardpoints, there are few missions that require heavy weapons. In fact, with the advent of Joint Air-to-Ground Missile and Small Diameter Bomb Increment 2, there is less call to carry anything bigger than 250 pounds.

Military users will not be enthusiastic, however, about a larger Avgas-fuelled aircraft, burning 100-octane fuel. Low-octane Jet A (which resembles kerosene or diesel fuel) is ubiquitous, harder to ignite and safer (for example, flame spreads more slowly).

However, a few weeks ago, Austro Engines and Steyr Motors jointly announced development of a 280-hp, six-cylinder aviation diesel. Austro already builds a smaller diesel for its parent company Diamond Aircraft's DA-42 (the basis for Aurora's Centaur OPV) and the new engine is destined for the high-performance DA-50 personal aircraft. That could be the key to Firebird's future -- not only weaning it from Avgas, but also improving its fuel efficiency and endurance.

I can't help noting the similarity between the 'bulge' in the nose of the General Atomics Predator, Grey Eagle and Reaper UAV's, housing satellite communications equipment (shown below on a Predator): 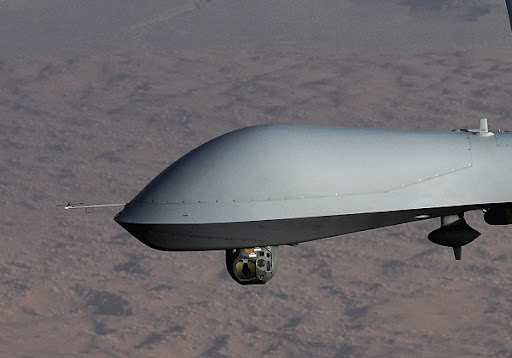 and the very similar bulge to accommodate a cockpit and pilot on the Northrop Grumman Firebird, shown below: 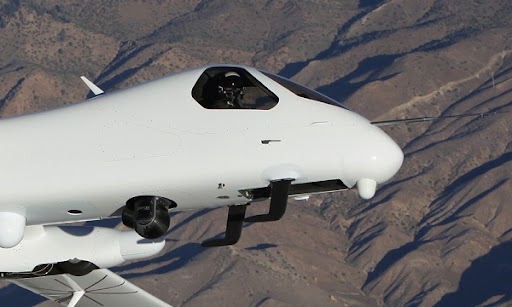 If the Firebird is as 'modular' as Northrop Grumman has claimed, I see no reason why the entire cockpit section couldn't be removed and replaced by satellite communications hardware, rendering the Firebird a functional equivalent (or better) of the Predator or Grey Eagle. If this could be done 'in the field' by local technicians, the Firebird could be reconfigured from piloted to unmanned missions (and vice versa) within hours. That could come in very handy indeed. I note that Northrop Grumman's press release stated: "From inception, Firebird was designed to be flown as a manned or unmanned aircraft and can be quickly modified for either option."

Another intriguing aspect is that Firebird has been produced as an independent, company-funded project, just as General Atomics did with its Predator and Reaper UAV's, and as it's continued to do with the Avenger jet-powered UAV, which it hopes will succeed the Predator and Reaper in US service. I think Northrop Grumman has taken a leaf out of General Atomics' book. As a report at Flight Global noted:

Firebird has the hardpoints required to carry weapons, a Northrop Grumman spokesman confirmed last week, but weaponisation has not been discussed in detail.

Though the aircraft was designed for the US military, Firebird does not readily slot into any defined capability requirements. 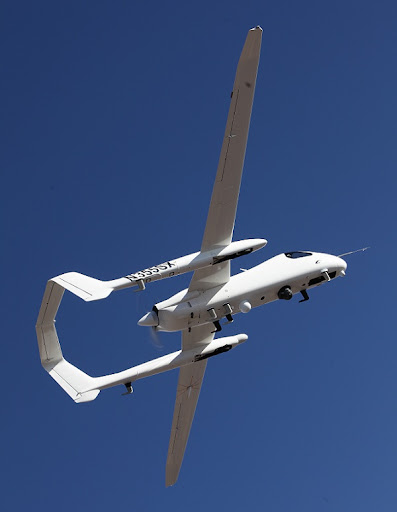 "I would expect to see, over the course of the next year, a change or an evolution [in US Army thinking] to consider this a strong capability," said Crooks.

The aircraft will be demonstrated at the Army's upcoming Empire Challenge exercise, where it will be tested in a range of scenarios. By demonstrating Firebird's capabilities, Northrop hopes to "change the buying habits" of the US Army.

Some demonstration flights have taken place in the presence of US military officials from several services. No concrete international interest has yet appeared. "We do think that there [are] international opportunities," said Crooks, "but we're going one step at a time with this process."

It's interesting that Northrop Grumman clearly foresees little difficulty in selling Firebird to US and foreign customers. I doubt very much whether they'd have invested their time, energy and corporate funds in developing it if they weren't fairly sure they could offer capabilities unmatched by any other current platform, in terms of either technology and/or price.

All in all, Firebird is a very intriguing aircraft indeed. This one will bear watching - as will its more developed descendants. However, the piloted version may bring its own problems. As a commenter on the Ares report quoted above pointed out:

"I see the USAF recruiting 5 foot pilots specializing in five hour flights at 120 knots and 5,000 ft with amazing bladder capacity."

I guess form truly follows function. This thing reminds me a lot of the old OV-1 Mohawk - http://globaldownlink.com/Mohawk%20OV-1D%20Aircraft.jpg

It's good to see that it was developed without taxpayer money. It's amazing how quickly and efficiently systems can be brought to production when companies are paying for it themselves.

In the video - at the 1:27 mark. What's that plane with the twin fuselage you can see sitting next to a hangar?

Dirk, I think that would be White Knight Two - Scaled Composites built that and Firebird (it's now a subsidiary of Northrop Grumman).

I thought that was it, but wasn't sure. Didn't know Scaled Composites was part of NG now.

"I see the USAF recruiting 5 foot pilots specializing in five hour flights at 120 knots and 5,000 ft with amazing bladder capacity."

Some of the long-range fighter missions in the Pacific during WWII were 7 hours or more in duration. (Iwo Jima to Tokyo, for example. Like my Dad did.)

After basic training, only the shorter pilots went into fighters - taller guys went into bombers. (My Dad falsified his height downward to stay in fighters.)

And the fighter pilots wore "relief tubes" for taking a piss.

Nothing new under the sun!

Hunh.... I'm wondering if the piloted versions will ever make it to a surplus sale someday.

It'd be neat to have civilians flying old "warbirds" again. :)