Created by UK game developer David Braben, the [Raspberry Pi] computer is about the size of a typical USB stick and will cost $25. With its USB port on one side and HDMI port on the other, it can function as a real PC.

What sorts of components can you fit on such a limited piece of real estate? Surprisingly, there’s enough room for a 700 MHz ARM11 processor, 128 MB of RAM and OpenGL graphics with enough power to display 1080p video. 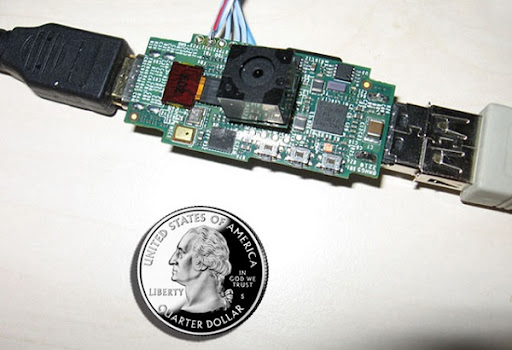 Braben’s little PC is versatile, too. In fact, that picture above shows a 12-megapixel camera he’s added for videoconferencing, photo taking and video recording. There’s an SD card slot for storage, and that’s where you install the operating system of your choice such as Ubuntu or other open-source operating systems.

While this Raspberry Pi is not quite fully baked yet, Braben’s working on it. "We hope something will be rolled out in 12 months," he says.

There's more at the link. Here's a video clip about the Raspberry Pi computer.

That might be very useful! I know smartphones offer Web browsing and the like, but their tiny screens and keyboards are a problem for many users. If one could carry something like this in a pocket, and plug any HDMI-capable monitor and USB keyboard into it, one could carry a great deal of usable computing power around. With 'cloud computing' making one's applications and data available anywhere with Internet access, this might provide much more 'portable computing' than traditional laptop or netbook computers.

Looking at this earlier today, I was imagining these little fellows in a Beowulf cluster - can you imagine the aggregate computing power?

When granddaddy used to say he lived to see the horse and buggy age morph into the Space Age and men walking on the moon - I'm starting to think we may actually live to see that look like a slow rate of change.

This could get interesting - have you looked at the "paper" computers yet?