On Memorial Day the USA honors its veterans, present and past, and remembers their service with gratitude. We're used to thinking of 'veterans' as being specifically members of the uniformed armed services; but there are others who may also qualify, depending on how strictly one applies one's criteria.

Vintage Wings of Canada tells the story of one woman whom I think certainly qualifies.

This spring marks the seventieth anniversary of one of the largest as well as one of the last raids of the London Blitz. So heavy and destructive was the raid of the night of the 16th/17th April 1941 that it became known to Londoners as 'The Wednesday'. Whilst most parts of London were affected by this raid, on this occasion it was the western side of the capital that suffered most and large swathes of Chelsea, the West End and St Marylebone were pounded with many lives lost and famous old buildings destroyed. 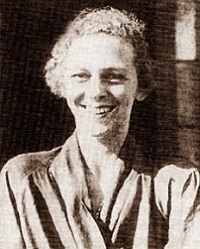 Yvonne Marie Green was a 30 year old thirteenth generation Canadian from Montreal who had recently been divorced from Tyrou Nichol, a British actor. She had re-married, this time to Leonard Green, an officer of the Canadian Army who had been posted on attachment to the Royal Tank Regiment shortly after the outbreak of war. The family home was at 24 Old Church Street, Chelsea but like all worried husbands who were in a position to do something about it, Leonard had tried to move Yvonne to the relative safety of the country and for a while, she dutifully lived with him near his barracks at Farnham in Surrey but being the fiercely independent and fiesty character she was, Yvonne was having none of this and soon moved back to London and later joined the AFS as a Firewatcher based at Chelsea Old Church.

Yvonne had left her baby daughter Penelope, in the safety of Canada with her mother and from her regular correspondence to 'Maman Cherie' which survive in the archives of the Imperial War Museum, we can see just how independent this remarkable lady was. Her letter dated 8th October 1940 demonstrates exactly what she thought of life in the country:

'Here I am back in London again, to your honor and my satisfaction. Honestly, Farnham was a simply dire place and I'd rather face Goering's worst than die from pernicious boredom. I take no chances, believe me, and when I'm not on duty I sleep downstairs very snugly in the basement. Don't alarm yourself when you don't hear from me because I have given instructions that if anything should happen to me you should be informed - so no news is good news - remember that.'

Yvonne's letters are all like that - newsy, common sense, matter of fact and with an unshakeable belief in the final victory of the British Empire and her Allies. By 23rd February 1941, she was writing home to report on her first night stationed at the top of the tower of Chelsea Old Church:

'I had quite an exciting experience on Wednesday night - my first night as a fire watcher. I was as high as one could get in Chelsea Old Church tower being shown around; where the buckets of sand, stirrup pumps and water were. And the bombs dropped! The first we'd seen in our district since September. I tell you, I have never descended a spiral staircase as fast in all my life! It was only a stick of three bombs in the next street which luckily did little damage and only one man hurt-a broken leg. So my experience was not disastrous luckily, but its going to take a lot to inveigle me up to the top of that tower again while a Blitz is in progress. I have never had a head for heights anyway.'

On the night of 16th/17th April 1941, Yvonne was not originally meant to have been on duty but had swapped shifts with one of her colleagues. At about 1.00 a.m., whilst the raid was at its height, she and five of her Fire Watching colleagues set off on a patrol along Chelsea Embankment. Whilst one of the team, a Mr Mallett was examining some shell fragments in the road, he became aware of something floating down behind him. He quickly realised that this was a Parachute Mine and shouted at the others to run. His colleagues were about twenty feet away from him and began to run towards Chelsea Old Church. Mr Mallett was running too quickly to turn the corner and follow them, so instead ducked for shelter behind a fire alarm cover. At about the same time, a second Parachute Mine descended between the still running group of five Fire Watchers and the Church. This mine exploded, also setting off the first and in the resulting blast, most of the Church was destroyed and five out of the six Fire Watchers were killed, the only survivor being Mr Mallett. 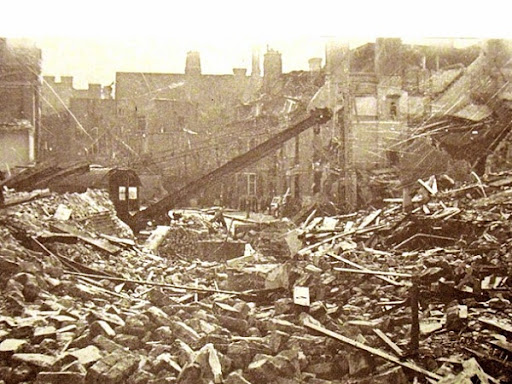 One of those killed was Yvonne Green, the visitor from overseas known as 'Canada' to her colleagues and 'Papoose' to her Mother. She had written what proved to be her last letter home barely two days previously, on 15th April 1941:

'The Blitz hasn't affected London for some days now or nights. I should say now but I think it is a fair assumption to say that it is purely temporary and we'll be getting it again soon - maybe. Adolf has a little too much on his hands now though to try and defeat civilian morale as well as coping with the armed forces of Greece, Yugoslavia, Australia and us (not forgetting the Free French).'

Yvonne's mother would no doubt have received this final letter after she learned of her daughter's death. Yvonne is remembered today, along with her four colleagues killed on that tragic night by a plaque inside the rebuilt Chelsea Old Church; 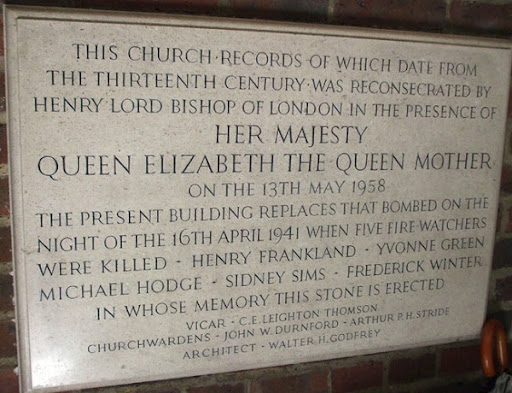 whilst Yvonne as the only member of the AFS amongst the group, has another plaque dedicated to her outside the church and installed by the excellent 'Firemen Remembered' charity which does so much to keep alive the memory of the men and women of the wartime fire services. 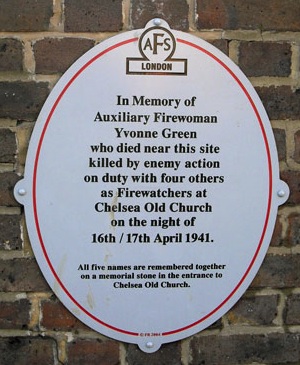 There's more at the link. Highly recommended reading, as are all Vintage Wings' articles. You can read more here about the AFS's role in the Blitz.

There were many like Yvonne Green. My mother was one of them. Her war was spent working during the day, first in a commercial firm, then for war production, whilst her nights were all too often spent on rooftops with a bucket of water and a stirrup pump, watching for German incendiary bombs, trying to get to them and put them out, or knock them off roofs into the street, before they could set fire to buildings. My father always said her war was harder than his. He spent three years in the Mediterranean campaign, fighting the Germans, but he always knew who was the enemy, and where danger lurked. Mom never knew from one day to the next what might confront her.

Heroes all; and worthy of remembrance on this day.

My mother rolled bandages and cleaned up messes and vomit.

Well done Peter, thank you for educating us!